Posted by Kathryn in American Studies on March 24, 2014

In honour (or should I say honor) of Spring Break, and to mark the one year anniversary of our grand roadtrip around the west coast of the US, my good friends came over to visit. I met Devon first, through my study abroad blog I had started before leaving for Arizona, and I’m very glad I did.

I like to be organised and to know exactly what will happen. Unfortunately, in many aspects of life this is not possible, and I certainly couldn’t have predicted how my year abroad turned out. However, I decided I could control how many people I would know when I arrived, and before my blog it was a grand total of 0. I signed up for the “amigo scheme” ASU offered (a buddy scheme with a hilarious mexican reference in the name given Arizona’s proximity to Mexico and its public distaste of the fact) and through it met Alex, a friend who I still keep in contact with and plan to meet with later in the year. However, I couldn’t predict that this would be the case, and wanted to branch out to a few different people to get as much help settling in when I finally got there.

This turned out to be a great choice; I’d recommend keeping a blog for studying abroad as not only did it reach people all over the globe, it put me in contact with people who I would be at uni with (not to mention my mum could see what I was up to without having to deal with the wailing feedback noises over skype). 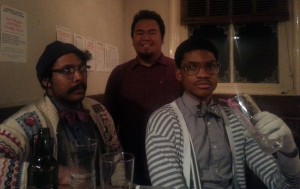 Through Devon I met Dustin and Omni, and for Spring Break we travelled through California, Oregon, Washington, Idaho and Nevada. I’d say its my favourite part of my year abroad, and when I left America in the Summer we promised to see each other soon.

So, two weeks ago they landed in London and we were finally reunited after a year of not seeing each other. It felt like we’d never been apart, and the week certainly flew by as fast as the previous year had seemed to. We explored Leicester, visited my parents (who took a shine to what I think are now their new adopted children), had a wine and cheese night (all English of course) and visited the union for a final night out on Friday. 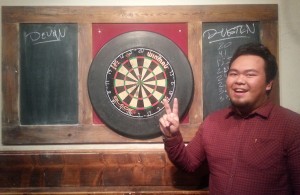 Having made such close friends, it’s funny to think I ever doubted my decision to go abroad. At times it was difficult, but I came out of it with friends I hope to keep for many years to come. Next Spring Break it’s my turn to visit them!

Kathryn has now graduated from the University of Leicester and is no longer blogging on this site.