All that is Pure

Posted by Courtney in American Studies on May 21, 2017

University of Leicester students are all short of time right now, what with it being the middle of exam season, so for this weeks’ blog post I thought I’d do something a little different. It’s a listicle, but it will be a short one with three suggestions for the purest, happiest things to get you through this stressful time. I know you don’t have time for much procrastination, but if you want an hour or so of pure escapism, then look no further than my following three suggestions.

This Netflix original show is one of my all-time favourite television programmes and one I’ve talked about before on my blog. Although three seasons of comedy revolving around a protagonist who was trapped in an underground bunker for fifteen years doesn’t sound like it would be pure and happy, you should hear me out and give it a go. Unbreakable is sometimes silly, sometimes serious, but always heart-warming and well worth a binge.

Can I Pet Your Dog?

I stumbled upon this Podcast just the other day, as I listen to a lot of others on the Maximum Fun Network. There’s something so pure and heart-warming about hearing dog owner Allegra Ringo and dog wanter Renee Colvert gush about our four-legged friends. Every Tuesday, they bring around an hour of joy into our lives by talking about dogs, educating listeners about unusual breeds, and generally being adorably excited about all things canine.

I wanted to include a movie in my list, and I was torn between Inside Out, Moana, and Lilo and Stitch. As much as I enjoy movies ‘for adults’, there’s something so comforting for me about losing myself in a ‘child’s’ film when I want to forget the world for a little while. Tarantino is all well and good, and one of my favourite directors, but I turn to Disney when all seems lost. Inside Out made the cut because it’s a light-hearted film with serious messages about feelings, changes, and the value of sadness. It’s my go-to film when I’m having a particularly bad mental health day and usually cheers me up at least a little.

Let me know in the comments if you try any of my suggestions, or if you know of any other pure and ‘smol’ things to sooth the soul.

As a bonus, here’s a picture of my cat fluffy; 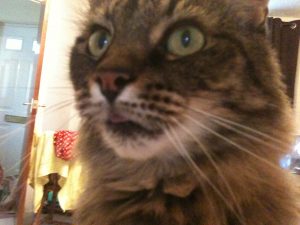