Soul of a Nation: Art in the Age of Black Power – Tate Modern exhibition

Posted by Liv in American Studies on September 11, 2017

I happened to flick through my brother’s copy of the Gentleman’s Journal lying on the sofa and by some stroke of luck saw an interview between art curator Zoe Whitley and Babou Ceesay discussing the Tate Modern’s powerful new exhibition; Soul of a Nation, Art in the Age of Black Power. Having already set my sights on writing my dissertation on the politics of African American art in the twentieth century I felt I had uncovered gold and immediately told my mum (my gallery and exhibition companion) that we had to go. I purchased the tickets the next day (they’re not cheap but the exhibition contains a very large selection of artworks as well as detailed commentary throughout so you get your money’s worth) and we decided to go the following Saturday. 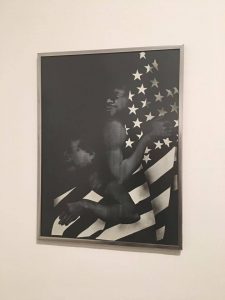 The exhibition starts with a series of  box-like television screens containing images and clips of figures such as Martin Luther King Jr., Angela Davis, Malcolm X and James Baldwin. The exhibition then takes you through time from the beginning of the Black Power movement and the Spiral group of artists, exhibiting Romare Bearden’s photostat collages and Normal Lewis’s abstract paintings. Having studied both of these artists on my year abroad it was fulfilling to see some of the work’s I had studied so thoroughly in the flesh.

You’re guided through room after room of different decades, locations and artistic styles which provides you with  an insightful and broad-ranging overview of the era and the artistic movements within the age of Black Power. I was impressed by the written commentary throughout the exhibition which explored the politicisation of African American Art and the battle between Art for Art’s sake and Art for political purpose. It touched upon abstract expressionism and the battle between social realists and abstract expressionists but couldn’t go into in-depth detail due to the nature of the exhibition and space provided.

For any American Studies student, art lover or anyone generally interested in this topic I would highly recommend paying a visit. This exhibition, although recounting the past, is more powerful and poignant than ever as we are currently a witnessing a period of American history in which racism may be more visible than ever. Soul of a Nation is an incredibly though-provoking journey through a turbulent time in American history and manages to show the power of art as a political tool, perhaps most importantly though it makes you think, how much have things really changed? 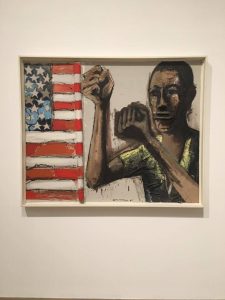 Hiya, I’m Liv and I’m a final year American Studies student. I’ve been studying abroad in Florida for the past academic year and am excited to get back to Leicester for my final year of Uni. I’ll be blogging about all the nitty gritty details of my last year, from extra curricular and social happenings to the modules I’m taking and my dissertation.