Posted by Charlotte in American Studies on July 24, 2019

Before coming to university, I never thought I would build such close relationships with my friends/housemates, however, over the past two years, our group of friends have travelled to and stayed in each others hometowns – Devon, Doncaster and London.  I had not been able to blog our first two trips, however over our final year at uni we are going to try and make the trips to each place once more!  I have just returned from staying with Holly and her family in London with Jowan and Bryony and thought it would be nice to share what we did with you all!

Unsurprisingly, all of us had visited London before, and so had already done the majority of tourist attractions in Central London… so Holly worked hard and we all pulled our minds together to come up with some activities for our three day trip.  Here was what we did –

Bryony arrived into Kings Cross and came to meet Jowan and I arrive into Paddington before we waited for Holly to come and meet us.  We walked along Southbank, stopping for a SNOG Froyo along the way, and Holly pointed out historical points of interest as we went.  Once we arrived at London Bridge, we caught the tube and then a train to Holly’s hometown – Bexleyheath.  When we arrived at Holly’s house, we unpacked our bags and got ready to go out for dinner and explore her local town centre.  We had a little look around the shops, I had my eyebrows threaded at Holly’s recommendation, and then we headed to Frankie and Benny’s and her local Spoons. 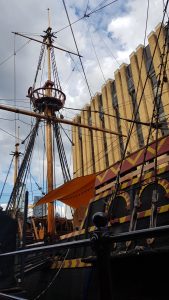 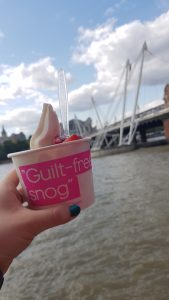 We had an early start as we got up and ready to go to Thorpe Park!  We hopped on transport to Waterloo Station and then got a train to Staines which took about 40 minutes.  There was a shuttle bus ready and waiting to take us to the park gates.  As students, we got in for just £20 which was amazing!  Unfortunately, it poured with rain the entire day and we got absolutely soaked… however, we did manage to get on all of the big 6 rides: Saw, Stealth, Swarm, Colossus, Nemesis Inferno and Tidal Wave.  Because of the rain and a few closures, we have also bagged ourselves a free rainy-day guarantee return so keep your eyes posted for a vlog on that!  Come the end of the day, we were absolutely knackered and after having a nice warm shower and stuffing our faces with pizza, we had a few glasses of wine, played Just Dance on the Wii and headed for a good night’s sleep! 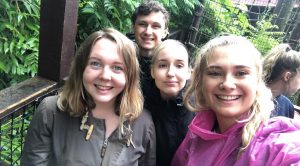 Standing in queue, getting soaked! 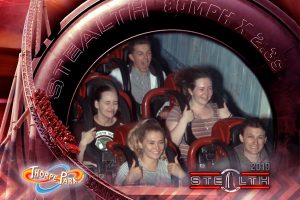 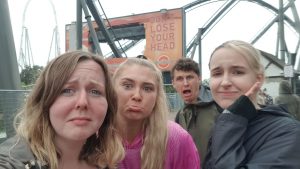 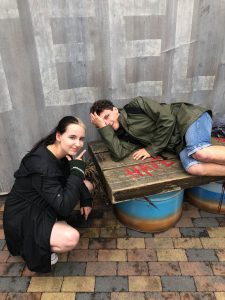 Jowan needed a lie down after every ride… 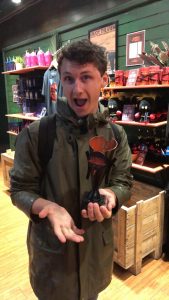 So we found him a trophy!

The weather today seemed to be a lot nicer, however we were going to be spending the day inside so it didn’t matter too much!  Holly’s dad kindly gave us a lift to her favourite shopping centre – Bluewater.  The plan for the day was to spend money in whatever form, but particularly to find some outfits for our night out!  We did a few hours and then stopped for lunch in TGI Fridays before carrying on.  By 4PM we had too many bags to carry, so caught the bus back to Holly’s house.  We had some food to nibble on whilst getting dressed up and then had pre’s with one of her friends and her family – it was SO good.  We then headed to Spoon’s to meet more of her friends and the Uber was the best I had ever seen – it had disco lights!! 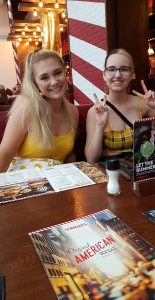 Reluctantly, we got up and had to pack our bags ready to head back to the stations in Central London.  We were sad to say goodbye but are already making plans to meet up again sometime next month! 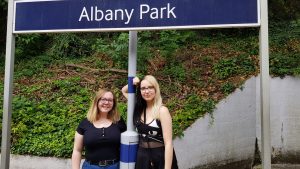 Posing at our daily station before leaving!

All in all, it was a really amazing weekend and I think we all had the BEST time.  This is the first of a series of blogs which I am going to call ‘Hometown Holidays’, so please keep your eyes peeled for more!  I hope this helps you to see that lifelong friends truly are made whilst at university, so much so that going the whole summer without seeing each other is impossible and it is inevitable that plans will be made to meet up no matter how far away you live from one another!

Hiya! My name is Charlotte and I am a second year American Studies student. The University of Leicester was my first choice university from the beginning and coming was my best decision yet! I love both my course and the friends I have made here and as cliché as it sounds, I could not imagine my life any other way. I plan to blog and vlog about a wide range of topics including my course, the university and city in general as well as student life. Outside of university, I love to travel, shop, cook and listen to/make music!