Posted by Natalie in Archaeology & Ancient History on January 8, 2014

University has certainly been a learning curve for me in terms of money as I’ve never had a regular job so I’ve never had a regular income. Come 1st year and I had a huge amount of money and a whole load of things to spend it on! Due to this my budgeting in my 1st term of uni was not very successful and by the end I was a little tight on funds so I resolved to do better in my 2nd term! I did do better but I wouldn’t say I followed a strict budget, I was just more aware of the money I actually had to spend!

Some people like having a budget to help them regulate their spending but others just enjoy spending;) In the ideal world no one would need a budget but alas we are students so on the whole that means we do. 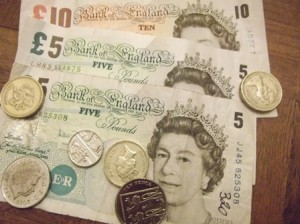 But having a budget doesn’t necessarily mean you have to be meticulous in your spending or in specifically allocating your money to certain things. However, it is helpful to know how much you have to spend for the term and maybe try and divide it into a weekly budget. Firstly though it’s quite a good idea to set aside money for rent and bills or if you prefer include it in your weekly allowance. However, sometimes there are things that cost more than your weekly budget and so you have to just allow for that later on and maybe spend less another week.

Whether or not you want to have a budget I would definitely advise working out the amount of money you have at the beginning of the term and not half way through when you’ve already spent most of it! Although overdrafts can be useful, you are spending money you don’t have, so you need to know you have the money to pay it back and I would only use it as a last resort as you probably won’t have an interest free one when you’ve left uni, so it’s not really a good habit to have!

You will want to spend as if you save all your money at uni you’ll be missing out on a lot of fun;) but as always, spend with care. A lesson you will learn over the time you spend at uni and probably beyond!

Natalie has now graduated from the University of Leicester.