Posted by anna in Archaeology & Ancient History on September 19, 2014

One thing I’ve noticed since I’ve started University is that all the holidays are really long, and while I thought at first that that would be a good thing, I’ve found that being at home for months on end gets very boring if I don’t have anything to do. Thankfully as well as catching up on a lot of sleep and reading, I found two archaeology based projects out there to participate in over the summer.

SHARP is a long-term research project based in Norfolk, excavating a range of different sites around the village of Sedgeford including a WW1 aerodrome, a Christian Anglo-Saxon graveyard, and a Roman Villa.

In July I joined their Basic Excavation Course and spent two weeks honing my skills excavating a Late Saxon D-shaped enclosure that ran through an earlier Saxon settlement. We cut metre-wide slots across the enclosure ditch which was almost two metres deep in places, which made it very difficult to climb out of the slot without a ladder! There were lots of finds, in particular oyster shells, of which there are literally thousands on the site, and also some Roman and Iron Age finds that had been washed down the hill from the Roman Villa.

The fortnight was extremely fun, though very hard work, and camping for two weeks really made me miss my bed, especially because my tent got extremely hot and stuffy inside sitting in the sun all day. Still, I’m going to go back next year to try out another of their archaeology courses on Human Remains. 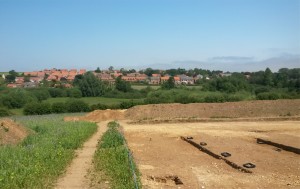 Butser Ancient Farm in Hampshire is an experimental archaeology site with reconstructions of buildings from different archaeological periods, ranging from the Mesolithic to Roman Britain. Last month I spent a week at the farm helping out with the Eurybia Project, which aimed to test prehistoric tools and methods to reconstruct two Mesolithic Log boats.

In the week before I arrived, they had tried (and failed) to hollow the log using fire, so along with two other students I used bone tools (which broke) and antler tools (which also broke) and finally steel tools (yes, they broke too!) to chop through the inside of the log. I also spent some time cleaning out the Iron Age roundhouses, which are surprisingly warm and comfortable inside.

It was a really fun project to work on, and the location is beautiful, nestled among the hills of the South Downs National Park.

I’m moving into my new house this weekend, so next week’s post will be about what it’s like to live outside of Halls for the first time.