Posted by anna in Archaeology & Ancient History on February 8, 2015

Yesterday the Ancient History & Archaeology Society organised a trip to Avebury in Wiltshire with Dr. Mark Gillings, one of the archaeologists who excavated there.

We left by coach from outside the Charles Wilson building at 8.30 am and reached Marlborough in Wiltshire by around 11 am, deciding first to visit two other monuments connected with the Avebury landscape: West Kennet Long Barrow and Silbury Hill.

In weather that was gloomy and incredibly cold we walked up the hill to West Kennet Long Barrow, a neolithic chambered tomb. The hill was extremely muddy, but what drew our attention was how the long barrow, so visible from a distance, disappeared from view until just before you reached it, something that has been interpreted as a way to increase suspense as people processed in a line towards the monument. Built around 3650 BC, the tomb was in use for a short time before being blocked with large stones. 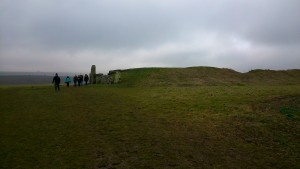 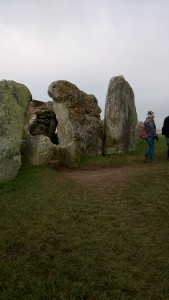 After West Kennet we drove to Avebury, a huge Neolithic henge monument with two smaller stone circles enclosed by a larger one. We were given a tour of the monument, including the half that was excavated and restored by Alexander Keiller in the 1930s. Most of the stones had been buried or broken up for building material, but Keiller recovered some of the stones and set them upright again, creating the monument as it is seen today. 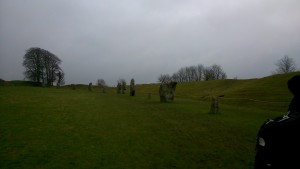 There are two (that have been discovered) avenues leading out from Avebury, connecting it to other monuments in the landscape including West Kennet, and we finished the day by walking down one of these and climbing a hill so that we could see how the whole landscape fitted together.

Overall the tour was really interesting, despite the horrible weather and the amount of walking we had to do!