Posted by anna in Archaeology & Ancient History on April 1, 2015

It’s day three of my holiday in Yorkshire, and so far, it’s going well. I’m staying in a cottage in the tiny village of Hebden in Wharfedale, which consists mainly of a pub, a farm shop, and 360 degree stunning views of the surrounding moorland. 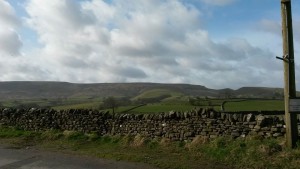 The View from the Cottage, looking over

On Sunday we spent the day at the nearby Grassington Moor where the remains of the sixteenth to nineteenth century lead mining can be seen. The moorland is dotted with mine shafts as well as various processing buildings, mills and chimneys. 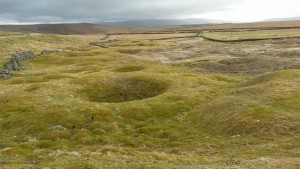 Shallow mine shafts at the Grassington Lead Mine

Today we visited Fountains Abbey and Deer Park near Ripon, somewhere I haven’t been for six years or so. One of the best preserved Cistercian monasteries, Fountains Abbey was established in 1132 and continued to be occupied until the dissolution of the monasteries in 1539. 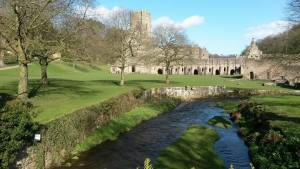 Although we’ve only been here for a few days, we’ve experienced nearly every type of weather imaginable; the wind has been high all week, and this morning the weather alternated between bright sun, and torrential rain and hailstorms which settled into sunshine for the afternoon until around 4pm when it started snowing! 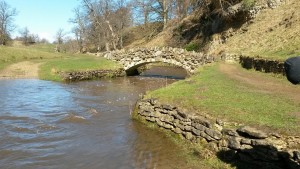 The Valley of the Seven Bridges, at Fountains Abbey 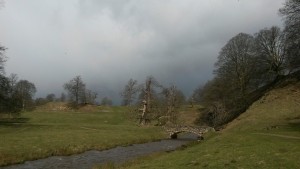 The Valley of the Seven Bridges, about 10 minutes later!

Tomorrow we’re going to visit Malham Cove, the largest limestone pavement in England, and I’ll be posting pictures from the rest of the week when I return home.

I hope you’re all enjoying your holidays!