My Adventures in Avebury (Week One)

Posted by Shannon A in Archaeology & Ancient History on August 20, 2015

As August began my three week compulsory fieldwork on the West Kennet Avenue, a World Heritage Site in Avebury, came to an end. The experience was a wonderful one that taught me a number of things from how to use a shovel properly to how to spot worked Neolithic stone tools from ordinary bits of flint. The research project, partly led by the University of Leicester, finished its third and final year of trying to answer the question of why the West Kennet Avenue was built and by who? And I was lucky enough to be part of the team!

Week one of the project began with us getting the site ready for excavation, something I had never done before. This involved removing the turf and top soil, which has to all be done by hand as we were digging on a World Heritage Site – and yes, I am still pinching myself over this fact! Despite it being hard work, working alongside one of my lecturers Dr. Mark Gillings who has worked on this project from the beginning and a number of others within the Avebury landscape made me feel like part of a team as well as making the whole experience enjoyable.

However, digging was not the only task carried out while on my compulsory three weeks of fieldwork as cooking dinner for all of my fellow camp mates, 25 in all, is also a duty expected of you and it was an experience in itself. Let’s just say cooking enough noodles for a stir-fry for 25 people on an ordinary cooker is much harder than it sounds! 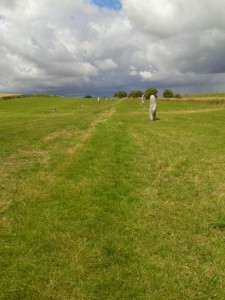 To hear more about some of the archaeological finds I discovered during my fieldwork keep an eye out for post of weeks two and three of My Adventures in Avebury!

Also you can find more information about the dig on the National Trust blog here: https://ntarchaeostonehengeaveburywhs.wordpress.com/blog/

One response to “My Adventures in Avebury (Week One)”