Posted by Shannon A in Archaeology & Ancient History on November 8, 2015

Remembrance Sunday is an event very close to my heart as I have two Aunties who have fought bravely in Afghanistan and Iraq and I am thoroughly proud of both of them. Therefore, each year around the time of November the 11th that marks Armistice Day, I make sure that I buy a poppy and attend the local Remembrance Sunday service or parade. I have attended Remembrance services both in my home town of Luton and of course in Leicester.

However this year it had completely slipped my mind. This is because the weather is still so nice I forget it is not summer. I was reminded though when I came across a man from the British Legion selling poppies in Malta’s capital Valletta. Without breaking tradition I bought my poppy and marked Remembrance Sunday in my diary. I tried to lookup where the service or parade would be held and at what time it started however my search proved fruitless.

Despite this I woke up early this morning and headed into the capital Valletta as I assumed an event of some kind would be on especially in some where like Malta who fought so bravely in the war. Before I had even got on the bus I noticed people wearing poppies and by the time we got close to Valletta the bus was full of people wearing both poppies and war medals. I used my initiative and followed the crowds who clearly were on the way to commemorate and remember those lost. 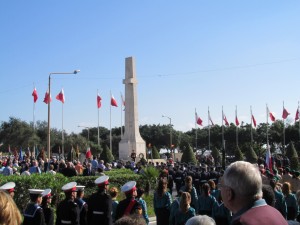 Thankfully I found where the parade started and got a wonderful view and managed to catch the whole thing. The parade and service even consisted of the firing of the cannons on the Valletta Fortifications as well as a flyover of old war planes. All in all it was a beautiful day to remember those who lost their lives, with a huge turnout (something that is always great to see) and the best Remembrance Sunday I have attended so far. 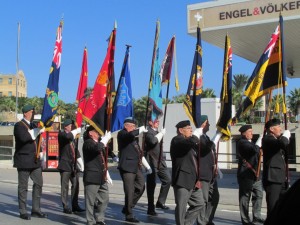 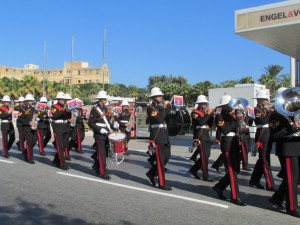