My Amazing Three Weeks on the Ardnamurchan Transition Project

Posted by Shannon A in Archaeology & Ancient History on August 22, 2016

Summer is usually my favourite time of year, and that is mainly because it is the archaeological fieldwork time of year. This year I was lucky enough to be able to go to the highlands of Scotland for three weeks to work on an Iron Age site.

Before getting stuck into the archaeology, myself and two of my best friends made the journey to the northwest of Scotland. Our journey took a total of 16 hours and 444 miles travelled on two coaches, one bus and two ferries. Despite the length of our journey it was a great adventure and only the start of my amazing three weeks in Ardnamurchan. 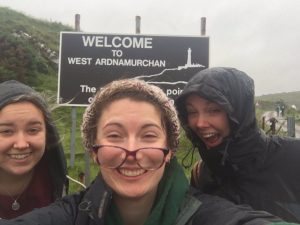 Once we arrived we set up our tents (or our homes for the next three weeks) and went on a tour of the local archaeological sites. The Ardnamurchan peninsula has been an area of interest for thousands of years, with archaeological sites from Neolithic closed cairns to Viking boat burials. The archaeological site I was lucky enough to excavate was Iron Age in period. 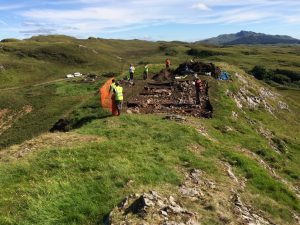 The first week consisted of us mainly deturfing and cleaning the site getting it ready for the recording and excavating of any features. By week two the sites possible function became clearer with the presence of a rectangular structure made up of stone and natural bedrock. Week three turned up more features, including several postholes and another structures, this time sub-circular. Some of the finds from the three weeks included several hammerstone fragments, pottery, flint flakes and two beads one glass and the other possibly jet or amber.

As well as the excavating, recording and interpretation of features on the main Iron Age site many other activities were available to take part in over the three weeks. These included test pitting (to learn more about how the environment in Ardnamurchan has changed over time), auguring and GPS surveying.

Other than the archaeology, the beautiful location we were in meant that in our spare time trips to the beach were a necessity. 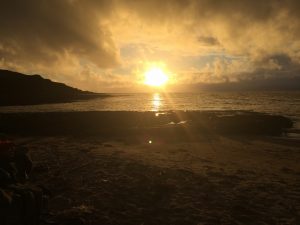 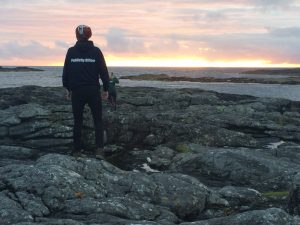 Having the chance to dig a wonderfully unique site in such an isolated and beautiful part of the country has definitely been the highlight of my summer, and I cannot wait for next summer to do it all again!