Living in Oadby – the student village

Posted by Joshua in Biological Sciences on February 6, 2012 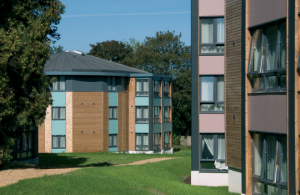 Accommodation can be one of a student’s biggest worries before starting University. It’s a new home, possibly miles away from friends and family, where you’ll be living with total strangers. But you shouldn’t worry, because living in halls can be the best time of your life!

In my first year of University, I was living in John Foster Hall in the Oadby student village. Oadby is a great little area, where the majority of first year students live. It’s one of the richest areas close to Leicester city centre, and if you ever take a casual stroll round the area, you’ll find lots of huge houses. I remember feeling extremely anxious as I drove there for the first time – who would I be living with? Have I left anything at home? Will I make any friends? How will I cope without my dogs? But the thing to remember is, everybody is having the exact same fears. Through Facebook, I was able to talk to some of the other people in my building, but I hadn’t found anyone from my flat. Meeting everybody for the first time was strange, but because it’s new for everyone, you all struggle through together and form extremely close bonds. My old flatmates are some of my best friends at University, and we see each other as much as possible. Fear not though – if you don’t get along with some of your flatmates, you’ll find plenty of other people on your course or in adjoining flats. I would recommend going around to other flats and introducing yourself, meeting as many people as possible. On the very first night, there was a social arranged in one of the neighbouring halls, which was another chance to make new friends. It was interesting to note that nowadays, people tend to share Facebook information rather than phone numbers. 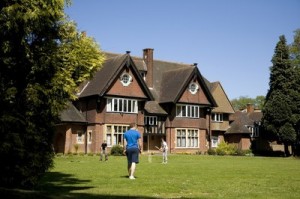 One of the buildings in Gilbert, Murray and Stamford halls

Oadby is a twenty minute bus ride from University, which has both its plus points and its negatives. It does mean getting up a little earlier in the mornings, not only to get to University but also to avoid the queue and to guarantee a seat (essential after a night out). However, if you’re a fan of going out clubbing, the bus ride to town in the evenings can sometimes be the best part of the night! There is a friendly rivalry between different halls, which means bus journeys are full of hilarious chants which never failed to make me laugh. Buying a yearly pass makes it cheaper, and also means you can get into town quite easily as well, to buy costumes essential for fancy dress nights. However, there are quite a lot of shops in Oadby which may mean you don’t need to head to town. There is an Asda approximately fifteen minutes away where you can buy your food, as well as a post office and a chip shop, for when you’re a bit fed up of the catering.

My first year in halls was one of the best of my life, and I really loved every second. I made some real friends for life, and adored the atmosphere around Oadby. I have very fond memories, such as relaxing on the grassy areas in summer or gathering in a friend’s room to watch a film with some pizza. In my next post, I’ll talk about how I found living in a student house within the city!

Until then, have a great week!

Joshua graduated from the University in Summer 2012 and is no longer blogging for this site.

5 responses to “Living in Oadby – the student village”