Posted by Chris in Biological Sciences on February 25, 2014

Being away from home, can be a tearjerker sometimes. Missing out on special occasions with the family (say, your Dad’s 60th Birthday) or missing the idea that most of your friends will be graduating the year without you!

However, you tend to realise, while you’re abroad, that at least I get to go home for the Christmas holidays to see people (unlike the Japanese exchange students for example!) and that it won’t actually be very long until I’m back in the homeland. Plus, everyone else here is in the same boat as you, which makes you all rely on each other as a kind of surrogate family. I realise, that people reject the idea of studying abroad because of being too far away from home. However, University becomes a new home for most students even though it is situated in the same country as your family. So what makes home home? It is, of course, the people you are with! While I have these awesome friends in Finland, I am never brought to depths of sadness. Because the people here are fantastic at bringing joy and sunshine (even in this dark country!)

Me and the family went to Helsinki the other day, and we even took on family roles (naughty daughters, my friend was the mother as the chief navigator of the group, hehe). It just goes to show, that family can be anywhere as long as you settle into these new situations well. 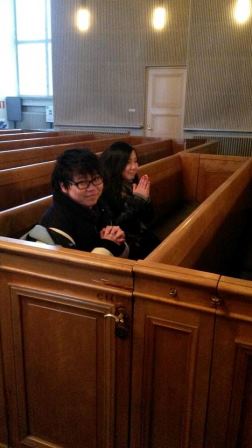 Naughty daughters banished to pray and think about their auctions in a segregated pew! 😉

Plus, my friend Ken visited England the other week and brought me back some PG Tips and Galaxy Chocolate… how heavenly! What else could I ask from this cool gang!