Posted by Chris in Biological Sciences on May 12, 2014

You may all know from my older posts that during my second year of studying at the University of Leicester, I was highly involved in its LGBQA Association as an Equality Officer, and then as Welfare Officer. Throughout that year, you blog scanners would tire away, no doubt, looking through my LGBTQA antics (precious posts of mine include: LGBTQA history month and ‘Gay’ socials etc.) wishing I had new material. However, this Association was my core support group throughout the year, and I loved every moment that I was a part of it!

However, while I have been in Joensuu (70,000 people.. a big city for Finland!) I have found no support network for LGBTQQIA people! I was shocked, but that doesn’t mean Finland is intolerant. In fact, I have found it to be a relatively tolerant country (suffering the same problems that most countries face.. even the UK). I asked the University about support groups early on the year, and they told me to get in touch with HOBILES: a Finnish LGBTQA equivalent. I tried to contact them and I got no response back.

However, in the past week, HOBILES organised HOHTO (Finnish for ‘shine’) in which they organised a series of events for LGBTQQIA people can hang out in a safe environment and participate in many activities. I was glad to finally hear that Joensuu had something going on, considering the only other way to meet gender and sexual minority people are through cruising apps (I won’t go into detail about these!) So HOHTO was a very pleasant surprise. We went out to watch the Eurovision song contest together the other day, and we have had several hangout opportunities where we can just sit and chat.

By far the best event was Joensuu Pride Parade. I always love to get involved in Pride Parades as it raises visibility to the wider public that we don’t live in a completely free society just yet! The chanting and the overall atmosphere were pretty great, even though there were about 50/60 people marching altogether! Definitely the smallest Pride Parade I have ever attended, haha. We had fun, and it was great to get this experience from another country. I think it is the Finnish way that onlookers do not protest against Pride Parade, which is nice (in London, you can guarantee a counter protest by Evangelicals or far-right wing groups for sure!) I caught sight of one grotesque gesture towards us, which was completely ignorant, but other than that, it was a smooth demonstration. 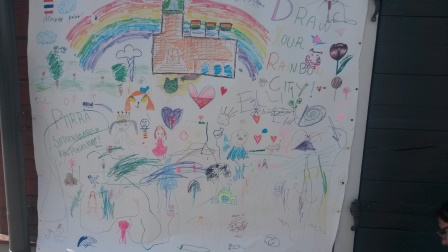 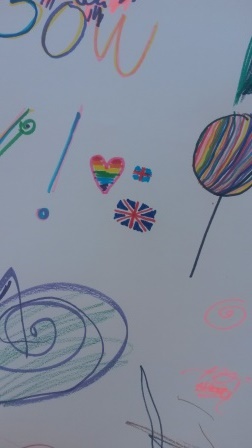 My little contribution to the Rainbow Wall

So here is my LGBTQQIA post for this year. Singular, I am afraid, but now I can gradually blog about my leaving this lovely country (wahhhhhh) as I leave at the end of this month. TTFN for now blog-followers xxxxxxxxxxx