Posted by Chris in Biological Sciences on October 19, 2014

So far, I’ve been thrown head first into dissertation research, which I really enjoy, but which takes up almost all my time.

Anyway, yesterday, me and a few hundred thousand friends went to London, to protest and rally for a better standard of working in Britain. We marched from Waterloo, all around to Green Park, where there were speeches and some music to listen to. There was an unbelievable atmosphere, which of course culminates from disgruntled and angry workers. I was marching with the NUS, and I think it was very important that we show solidarity with workers, considering that work is our main worry after University! With unpaid internships favouring, only the upper classes, you can see this as one problem which shows who David Cameron and his cronies at no. 10 are really representing.

The speeches were insightful with some facts you would never think possible from 21st Century Britain. 3.73 million children are living in poverty in the UK. With 6.5 million households altogether living below the poverty line. What makes this worse, and the main reason behind the protesting is that half of these families are in work! We also have a welfare minister in Government who says that disabled people are worth less than others.. precisely £2 an hour! We can’t have these kind of people shaping our policies, when disabled people have come so far in integrating into society and nut jobs like Lord Freud want to take us back to the 19th Century.

We also saw Russell Brand and Jolyon Rubinstein taking part in the protest. Russell Brand might be a bit useless, but it’s also nice to see some known people

who are down to earth and who don’t ignore the suffering of the working classes.

Minimum wage was a big and successful change in the 1990s, and now we really need to implement a living wage of 10 pounds per hour. It certainly is possible (it happened in Seattle, Washington) so I have no doubt change could happen here too. 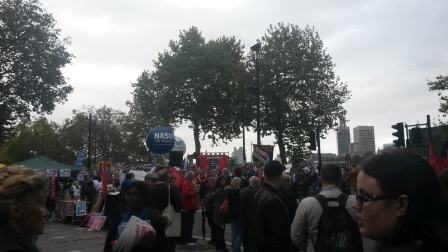 at britain needs a pay rise