Posted by Chris in Biological Sciences on May 24, 2015

So, I have just had my first final year exam and it was pretty good, I have to say. The nature of the exam (like my others to come) is to write 3 essays with an either/or dimension. To be honest, I enjoyed the module so much, that revising for it was pretty great, and I have the feeling that I won’t share the same enthusiasm for my other 3 exams! The worst thing about it, for me, was actually the fact that I haven’t done a proper exam in 2 years! The feeling of sickness leading up to the exam was the worst part for me, and having to experience that 3 more times is just tortuous!

Anyway, whilst I prepare for my other exams and to break up one of my longest blogs yet, I thought I would tell you all about a post exam holiday that I have booked. Even though I’m only 1 exam down, I am so ready for exams to be done!

I’m really excited about my holiday because one of my friends I made on the Erasmus exchange lives there so I’m visiting her for a week, so it will be really nice to catch up. I am going to leave you all guessing as to where I’m going, right now, but will gladly give you a few clues.

If you don’t know which city I’m referring to, and you actually had to google which city I’m describing, then shame on you blogosphere!! I won’t reveal which city it is, just to give people a bit more time to think. 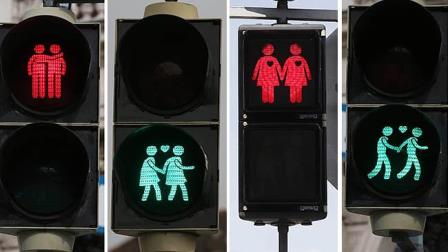 Where could this be sighted I wonder?

People who do know which city I am referring to, will also make the link between my clues, as they all relate to promotion of equal rights for sexual and gender minorities. Although Sigmund Freud had dodgy ideas about male sexuality being a result from absent fathers and overbearing mothers (in men), this theory reflected the world’s views of same-sex attraction at that point in time, where researchers sought to ‘cure’ homosexuality. Of course, we now know this to be false, but this kind of teaching still goes on in places in the West. Mainly in America, organisations such as the Family Research Council insist that sexuality deviating from the norm can be ‘repaired’. Of course, these kinds of views are more commonplace in other places in the world too, you only have to look at ISIS, Uganda’s “Kill the Gays” Bill and Russia’s “Anti-Gay Laws” to realise that these views are present in many parts of the world. Although things have improved greatly for a lot of the LGBT*QIA community, International Day Against Homophobia and Transphobia (IDAHOT) teaches us that we have a long way to go ALL around the world, to ensure equality and liberation for all. Small gestures such as same-sex traffic lights go a long way to making people feel included, and the increased visibility of gender minorities (brought on by Conchita Wurst – the ‘bearded lady’) may alienate some countries – but, also let the people in oppressive countries know that they are welcome!

IDAHOT actually took place a week ago on the 17th May, but due to exam preparation, I didn’t feel like I had time to write about this important day, that is often overlooked by the mainstream. A final point I would like to end this serious piece on is for people to assess the way they talk and act around people who are gay or trans* etc. While days like IDAHOT may seem unnecessary to most, I see that is needed even more every day!

I would advise people to avoid the phrase ‘that’s so gay’ or anything similar, as you relate to lesser things as ‘gay’. Using this language around people who may not be ‘Out’ yet, makes them feel even more insecure about themselves and what the world’s reaction to their sexuality might be. While working in the Computer room, the other week, I overheard a conversation between 20year olds, condemning a gay ‘friend’ of theirs who had more than one boyfriend and would sometimes wear corsets. Whilst judging him for being ‘un-Christian’ I couldn’t help feel that they were doing the least Christian thing you could do: thou shalt not judge springs to mind!

From a social point of view, I would also ask why they felt that having multiple partners or wearing corsets was worthy of laughing about and worth demeaning him behind his back? People appear to be scared by deviations from social norms, even though it has literally no impact on them whatsoever. Even though people might think this kind of talk is harmless, if people like me could overhear, who else could have overheard? Another person questioning their identity, perhaps?

I hope that anyone who reads my blogs realises that the world has changed so much, and that I started writing this blog as a member of the Leicester University’s LGBT*QA Association. Even though, I have not been active in the society this year (due to work and personal circumstances), I realise that raising visibility for this group is more important than ever!

I hope that people enjoyed my mixed topics in today’s blog, and that as humans, we have to talk about serious issues at University too, in order to feel like you have grown as a person as well as an intellectual. With 3 more exams to go, my next post will probably be in a couple of weeks now, once my exams are over. Until then, TTFN you beautiful bunch of blog pundits! xoxoxo

One response to “Processing exams and addressing social justice”