Posted by Daisy in Biological Sciences on August 21, 2015

For my sister’s birthday, I got us tickets to see Passenger in Schwetzingen. The plan was to go on a little trip to a few places in Europe before the concert, so whilst I was still in Heidelberg we had a few Skype calls and sorted it all out. I’d like to say that my year abroad made me a lot more aware of the cost effective ways to get around Europe easily, along with the best ways to find cheap yet bearable accommodation. So all in all we didn’t break the bank too much (we are students after all with no steady income).

First stop was Prague- I’d been intending on visiting this city for a while after so many people had said how beautiful it was. We spent 3 nights here, so got to see everything we wanted to in the time that we were there. It is such a pretty city and hence very touristy; I didn’t actually realise how many tourists visited Prague until physically being there. There are so many beautiful buildings and it was well worth uphill climbs in the scorching sun to see the city from above. We also spent a day at the zoo which was well worth a visit. It is the biggest zoo I’ve been to and even had a honey badger lording it up. Lots of the animals had recently had offspring so we saw lots of cute babies (the highlight being a baby monkey causing mischief with its mum). 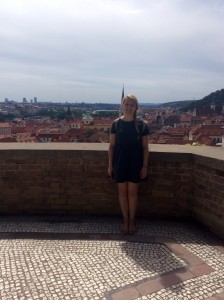 The view of Prague city

Next stop: Salzburg. I am still not quite over how beautiful Austria is. I’ve seen a lot of stunning German towns during the past year, including the Black Forest and Mummelsee, which has a beautiful lake. Salzburg, however, is in a league of its own. Not only is it Mozart’s neck of the woods, but it is also where a lot of the Sound of Music was filmed. Anyone who knows me is aware of my little guilty pleasure, in the form of musicals. My childhood as a dancer doing competitions and shows throughout the year (when I say childhood, I’m talking ages 3-18) means I can’t help but know all of the showstoppers and I’m quite proud that I know all of the words to Cell Block Tango- it’s badass. Anyway, I was in my element hopping down the steps in the von Trapp gardens and seeing the pavilion where Ralph serenaded Louisa during that fateful song at the ripe old age of 16/17. 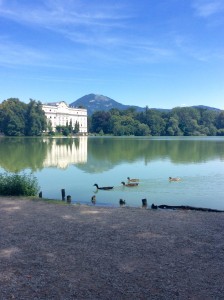 From Salzburg we got a disgustingly cheap train deal to Darmstadt, where we stayed with my American friend for a couple of nights to recharge our batteries and have a catchup (sampling the Hessen speciality of Apfel-Kirsch wine). From there we went on to Heidelberg, which is the German town I lived in last year. It felt good to be back and it will always be somewhere I call home. We went to my all time favourite restaurant Schnitzelhaus, which has 101 different schnitzels on the menu and anyone that visited me last year got taken here because it is simply delicious and very German. I did almost shed a tear at the thought that I won’t be going back for a schnitzel in the foreseeable future.

We then took a short bus ride to Schwetzingen, the location of the Passenger concert and our final stop on the trip. The concert was in the Schloßgarten (castle gardens) and was an open air event. Stu Larson was the support act, an Australian dude with a lot of hair and an incredible voice. He also has a talent for the harmonica. We were lucky enough to meet him after the show and got a cheeky photo and signature (it was raining by this point so I’m wearing a poncho/bin bag in the photo so the circumstances weren’t the best). He had a super fan in the crowd who was kicking off as he didn’t play her favourite song so he promised to give her a private performance after, what a babe. She was also seen giving him an envelope with her address on after the show which was probably quite alarming for poor Stu. Passenger then came on and we were not disappointed. It felt like such a personal show; he told us the stories behind a lot of his songs and was thankful for everyone being quiet and just listening to him perform. I’ve never seen a man and his guitar hold a crowd so well, you could hear a pin drop at times and there was no need for anything other than his voice and his guitar. He’s also a funny guy, although I think a lot of his banter was lost on some of the Germans who I’ve found can be a bit slow with sarcastic English humour. I’m putting it up there as one of the best shows I’ve been to and it was well worth the euros! 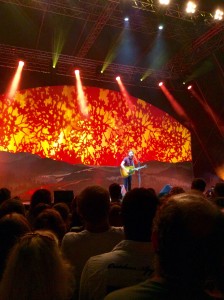 I’m now having a few days in Liverpool at my sister’s uni house, followed by a few days at home, before flying over to Dublin to meet a couple of my Canadian friends. We’re staying in Dublin for 5 days then they will be coming back to England with me for the remainder of August. Then it will be September and I’ll be moving into my new house in Leicester and reacquainting myself with the David Wilson library for a month before term starts.

Wishing everyone a happy and relaxing summer!
Daisy x