Graduation; from both sides

Posted by Daisy in Biological Sciences on July 25, 2016

On Friday the 15th of July I officially graduated from the University of Leicester with a BSc in Medical Biochemistry with a Year in Industry (with a 2:1 degree classification!). It was a truly magnificent day, full of celebrations. I was allocated three tickets for the ceremony, so my parents and my boyfriend attended with me. We all went to the new medical building to attend a drinks reception before the ceremony. It was nice for my parents to finally be able to put faces to the names of staff I have mentioned, such as my personal tutor and my lab supervisor. It was then time to head over to De Montfort Hall for the ceremony. As my housemate and I were the only two students with our specific degree title, we were able to sit together which was a nice end to our four years together! We’ve been friends since the first day of university and both went over to Heidelberg together for our year abroad, so Fliss has been a massive part of my university experience and I will miss her lots now that we will be going our separate ways. Unfortunately our other housemate Emily had her graduation on the 14th so we were unable to get a house photo, perhaps photoshop can help rectify this! 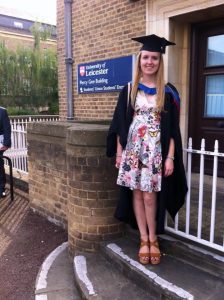 After the ceremony, we all headed over to the station to meet my younger sister who had been on placement so could only join us in the evening. After a bit of bar hopping we eventually went to Taps for dinner, a cute little restaurant in the city centre. It was a lovely evening of celebrations and it was nice to share it with some of the people who have supported me throughout my time at university.

Last week I was working for Ede and Ravenscroft at Nottingham Trent University graduations. They provide ceremony robes for many universities during graduations. My role was to dress students in their ceremony gowns and to organise gowns that were being returned at the end of the day. It was an exhausting week, working 7.30am until 5.30pm with an hour commute either side of the shift. After attending my own graduation the week before, I had no idea how much work is involved in providing every student with ceremony dress. Looking back on photos, I am also horrified at how wrong I was wearing my hat and gown/ hood! The money I have earned working for last week will be going towards my trip to Canada, which is less than three weeks away! Once I have my Canadian dollars ready it will all feel real…

Congratulations to all students who have graduated and best of luck for the future! I will be doing one final post by the end of the month before bowing out, so look out for this.
Daisy x