Posted by Beth in Biological Sciences on October 3, 2017 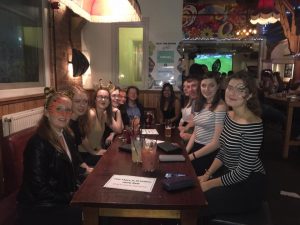 Our first social of the year was our welcome social. We went to the Zoo Party (hence the animal themed makeup)!

The Freshers Fair is only just over and it’s the start of the year, but for anyone who is on a club committee Freshers signalled the end of the first few months being a committee member and one of the busiest times of year. I thought I’d let you all know a bit about what I have been doing so far!

I joined the equestrian team last year during freshers and really enjoyed playing polo. So when the club started looking for this year’s committee around Christmas last year I put myself forward for polo captain. The club then voted for each role from everyone that nominated themselves and in March we had our committee for this year. So while I’m know you are just settling in and have probably just signed up to more clubs and societies than you could possibly go to just bear in mind that you may want to think about being on a committee next year in the next couple of months (because it is only 83 sleeps until Christmas you know!).

So in March last year I knew I was going to be polo captain. The first couple of months were quite quiet, we had our club handover from the old committee to the new at the end of March but we didn’t really take over running the club until after the exams towards the end of the year.

Then began one of the most important parts of our year: Organising freshers.

Throughout the Summer I had to organise the dates of our Polo Taster sessions (the last one is on the 14th October if you want to give it a go), work out how many lessons we need for the year and as a committee as a whole we had to organise all our social media advertising, what we needed on our leaflets and banner for the freshers fair stalls. While I was organising polo, everyone else was also busy organising their particular part of the club.

Then the Thursday before term started all Team Leicester clubs attended the Team Leicester Training Conference which briefed us all on the important things we needed to know about the new year from BUCS fixture rules to Sports Awards.

We had a final committee meeting on Monday afternoon and we were ready for the crazy week that Freshers always is. We had a lot interest at the fairs and loads of people signed up for our mailing list so all the preparation paid off and we are ready for another year being the best club at uni (biased maybe, but still true).