Posted by Beth in Biological Sciences on June 24, 2018

As you will know if you read part 1 of this post, I spent last week on the conservation biology field course. This makes up part of the teaching for the third year module, which I will study next year in semester 1. Over the week we went to locations around Leicestershire and Rutland to look at the conservation of different environments.

Over the week we were introduced to five areas of conservation; woodland management, wetland management and osprey conservation, agriculture (covered in part 1), river restoration, and biodiversity offsetting.

There has been a project in Market Harborough in recent years to restore the river to a natural state, as much of it was concrete sided. A natural river looks a lot nicer but is also much better for wildlife. A lot of British rivers, including this one, have been straightened in the past, to try and prevent flooding. This doesn’t actually work, so there are efforts to reintroduce meanders. To do this berms are constructed, often using stakes in the water with willow twisted between them which forms an initial structure for a shallow bank to form. 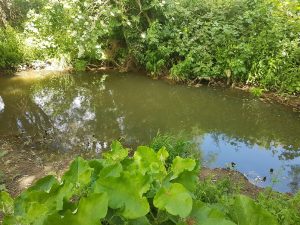 The stakes in the water at the edge of the bank, show the start of berm construction.

There have also been efforts to make steep banks shallower on the inner meanders. This helps to reduce erosion and also makes the margins wetter so more species can live there.

In the afternoon on the Thursday we had some practise at doing a phase one habitat survey. This is a standard system in the UK to classify environments. It basically means making a colour coded map of the site and includes target notes which point out any important species. For example all British bat species are protected, so if they are roosting on site this needs to be noted. This survey is used to identify any further surveys which need to be done of an area, before it can be decided if it can be developed. 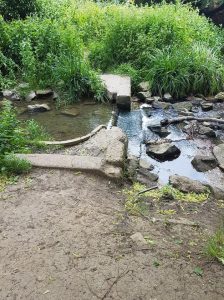 A concrete weir that has been partially dismantled.

On the Friday we went to Bardon Hill, which is the highest hill in Leicestershire to study biodiversity offsetting.

Biodiversity offsetting is a solution to balancing development and conservation. It should be a last resort but basically it means compensating for biodiversity losses by creating new areas. This means there should be no net loss of biodiversity.

We looked at the example of Bardon Quarry which is in an area that has SSSI sites. It is ran by Aggregate Industries and employs 500 local people. This quarry supplies 15% of aggregate nationally, but it is coming to the end of it’s life and a new quarry on the other side of Bardon Hill is being opened. To avoid building a whole new processing plant, they will build an underground railway through the hill from the current one to the new quarry site.

Biodiversity offsetting measures meant that when the new site was cleared any species of importance had to be transplanted. So hedgerows were moved, top soil form the woodland (which contains the seed bank) was relocated and a rare lichen that only grows at a certain height and direction had to be moved. This meant that they had to build a new hill at the right height to do this.

All this sounds great but it still disturbs and risks losing species and biodiversity, so it should always be a last resort! 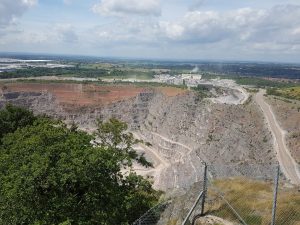 The old quarry site that is nearing the end of it’s life.

So this is just a brief overview of the topics we covered over the week and we will learn more in lectures next term, but so far I have enjoyed the module!

I am now very ready for summer to start, especially as I only have a month until I start my lab placement which will be full time until the end of the summer!