Posted by Beth in Biological Sciences on January 29, 2019 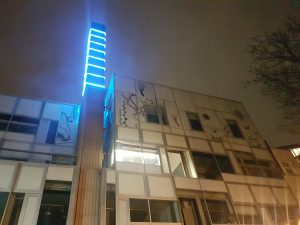 On Friday evening I went to ‘Last Friday’ which is an event held on the last Friday of each month at LCB depot, close to the Curve Theatre. There are street food stalls in the courtyard, as well as a bars, cocktails and music/art and as their website says ‘vibes’. It is open from 4pm until 10pm, it’s free entry (you just pay for the food and drink) and is a great end to the working week or a start to a Friday night out!

This was the first time I have been and it was advertised as having vegan street food at this one (I’m not vegan but I try have a plant base diet most of the time). I thought it was a nice venue, the abundance of fairy lights won me over and it had a great atmosphere. As you can probably guess from somewhere that describes what it has to offer as ‘vibes’ it is a pretty artsy place and was complete with improv performances, like a pair of nymph like characters skipping through the crowd. I wasn’t that fussed with this side of the evening; I went for the street food but it did give the event an offbeat feel. 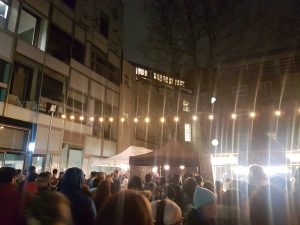 The courtyard where the street food stalls were.

When we got there we had a cocktail, which was tasty although I don’t think it was particularly strong for the money (£7.50 I think) and for the rest of the evening we had drinks from the normal bar of wine/beer. I think there was a good range of drinks on offer and they weren’t as expensive as I was expecting from the venue but my biggest complaint is that they were all served in plastic cups with plastic straws. I would have hoped from an event that seems like it was have progressive ideas that they wouldn’t still be using some much single use plastic. Even if they needed to use plastic cups to avoid people just wandering off with glass ones, plastic straws shouldn’t have just been put in the drinks as standard.

But what about the food?

There was only one completely vegan stall called ‘Bamboo Street Food’ and then some other stalls serving a mix of food. This did mean that there was a HUGE queue for Bamboo, but we decided to go for it as we had really wanted to try it. I had the Coconut Tandoori Naan which was really nice! The food all smelt amazing and it was lovely to be outside in an evening (thankfully it didn’t rain!). All the food was quite expensive but I was expecting that with the kind of event it was. 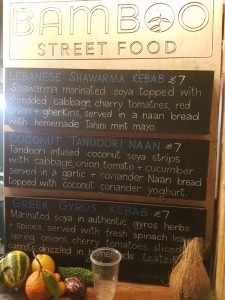 The menu at the stall we got our food from. 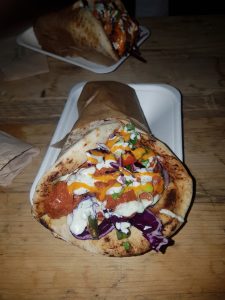 Overall I had a great evening and the food was tasty! I think there could be a couple of small changes, such as having more stalls with a bigger variety and this could be an amazing event! Either way it’s something different to do on a Friday evening and I recommend giving it a go whilst you are in Leicester!