Catch up with my travels (Part 1)…

Posted by Beth in Biological Sciences on June 24, 2019

As you know a week after my last exam I left Leicester for a few weeks of travelling and sunshine!

We flew out to Bangkok for the start of a couple of weeks exploring Thailand!

The first night we stayed in Bangkok in an amazing hotel which was very snazzy as a celebration of me having finished my exams and my final year at uni! The hotel was beautiful, complete with an infinity pool overlooking the city, and to make it even better we got upgraded to a massive corner suite with the fanciest hotel bathroom I’ve ever had! 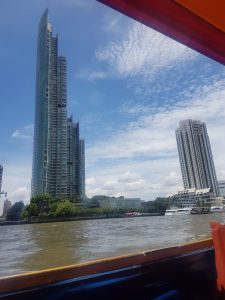 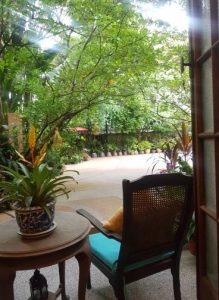 We had two days in Bangkok, the first day we wondered around the city and visited Lumpini park, which was very pretty and home to some enormous monitor lizards! That evening we headed to Na Aroon, which has amazing vegetarian food and also some seafood too! The restaurant was stunning and the food was incredible! We ordered a set tasting menu and were not disappointed it was a wonderful first night in Thailand! For our second day in Bangkok we visited The Grand Palace, which is probably the most famous site in the city and for someone that had never been to South East Asia before it was so impressive to see the architecture of the temple and palace! One of my favourite bits of the visit was the water taxi we took to get to there which meant we got to see quite a bit of Bangkok from the river. 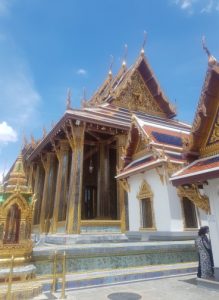 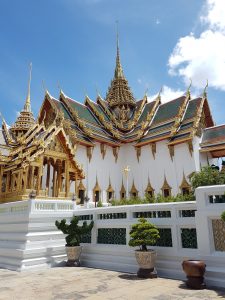 At the end of the day we flew up to Chiang Mai in the North, where we planned to stay for a few days in a lovely little hotel! I loved this city, it was a really interesting place with much of the old towns city walls still standing and an abundance of Buddhist temples, a world away from busy Bangkok. Whilst in the North I was determined to see some elephants, something which has been on my bucket list for a really long time. I was also very set on finding a Elephant reserve which matched my values and treated their elephants well, I personally didn’t want to ride the elephants and preferred the opportunity to see them in a more natural environment. We found a company called ‘Into the Wild’ after a lot of research, it seemed to have the best reviews and had five rescued elephants which had a huge area with three mountains where they were free to roam. We went on a half day trip and got to walk alongside the elephants and feed them bananas, as well as swimming with them in a river. I absolutely loved it and I am glad we found ‘Into the Wild’ because the elephants all seemed very well looked after and had a good bond with their keepers. 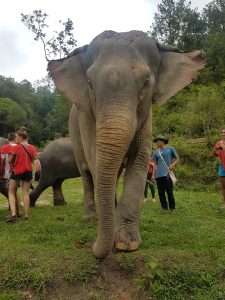 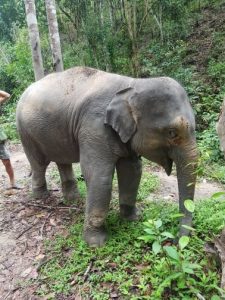 One of my favourite evenings of the whole trip was in Chiang Mai, we went to a street market for food and had some delicious dishes! We also wondered over to The North Gate Jazz Co-Op, it was a really cool bar with some great live jazz music and on our walk home we stumbled upon a festival at one of the temples with an amazing atmosphere. 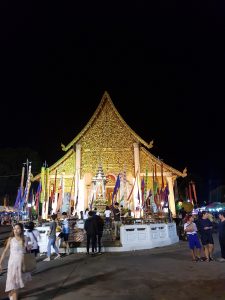 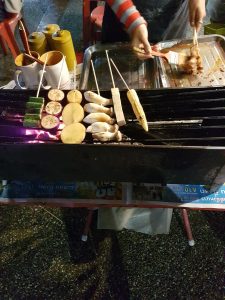 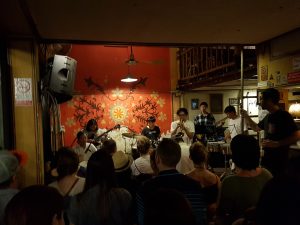 After a few days in Chiang Mai we headed back down to Bangkok and met up with some friends which live in Thailand and teach. We visited some really good restaurants, bars and a techno club which was a good night. We also explored a huge market, which I’m pretty sure you could have found nearly anything at if you looked for long enough! Going to markets abroad is one of my favourite things to do whilst travelling, you can find some really cool and unusual stuff. We also took a day trip to Ayutthaya, which was historically the capital of the Kingdom of Siam from 1350 to 1767. The ruins of the cities temples are now part of the Ayutthaya Historical Park, which you can visit. 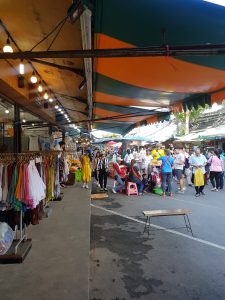 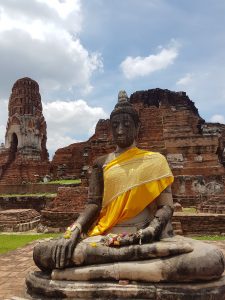 After this we travelled to Chanthaburi, the town which our friends live and work in. This town is not a typical tourist destination and it was nice to see day to day life in a normal Thai town. We hired a bike and drove out to a nearby waterfall for a walk, it was really beautiful and nice to get out into the countryside for a bit. 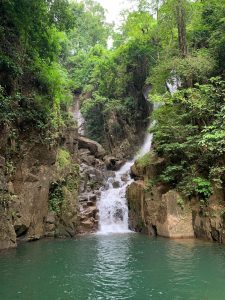 Our final stop on our trip was an island called Koh Chang, we stayed at Lonely Beach which was very chilled because it wasn’t in high season, but you could definitely see the party town that it would turn into when the tourists descend. We stayed in a great little hostel called Beach Jungle and spent our time there either eating or drinking at one of the cool restaurants or cafes (my favourite was a treehouse style restaurant called Oasis), or at the beach. The sea was so warm and we went swimming nearly everyday. I had never been to a tropical jungle island before and I was in awe at how beautiful it was, I was also super excited to see a hermit crab, monkeys and fireflies! 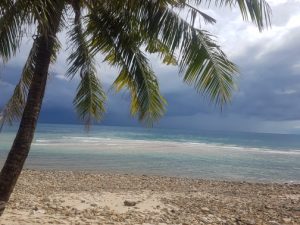 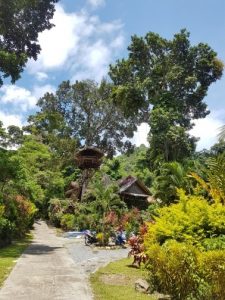 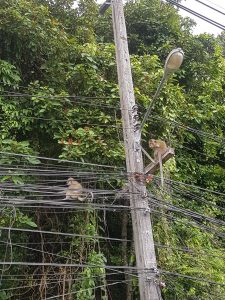 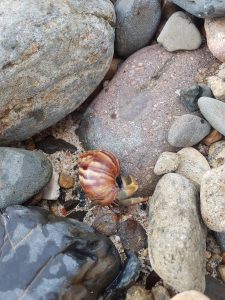 It was an incredible trip and I was very sad to return to England at the end, but I was lucky enough to fly out to Seville for a weekend in Spain two days later, check out my next (and final) post to see what I got up to there!