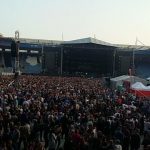 After Leicester won the Premier League title a few weeks ago, the city has been the liveliest I’ve ever seen it. A couple of weeks ago we had the LCFC parade, with the tour bus ending in Victoria Park. As my student house is across the road, I didn’t have much of a choice in […]