Posted by Harry in Cell Physiology and Pharmacology on November 21, 2013

When I return home my first instinct is to check facebook, today was no different. Between the usual photos, buzz feed links and bit strips was a status that caught my eye, it was a friend saying he was sad to hear the news of the death of Frederick Sanger.

Frederick Sanger was a member of an elite club, he could look down on 872 Nobel Laureates as he had two of them. However, by all accounts he was a man that didn’t look down on anyone. He turned down a knighthood as he didn’t want to be called Sir because “A knighthood makes you different, doesn’t it, and I don’t want to be different”[1].

I started to think about where medicine and science would be without his findings but it was too hard to comprehend. Frederick Sanger’s Nobel Prizes were for “for his work on the structure of proteins, especially that of insulin” (in 1958) and with Walter Gilbert “for their contributions concerning the determination of base sequences in nucleic acids”.

Proteins are one of the key components of your body. They play a number of roles including maintaining structure of cells, signalling and catalysing reactions. Back in 1950 it was know that proteins were made up on a number of building blocks, called amino acids, but it was thought that the order of amino acids was random. In fact it was so well know that they were random that when Frederick Sanger submitted a research grant to the Medical Research Council to look at the order of amino acids in a protein it was turned down as everyone knew that the pattern of amino acids was random.

His later papers showed otherwise (links at the bottom). As anyone with a A-level in biology will tell you the order of the amino acids used to build a protein determines its structure and function. The MRC probably kicked themselves about it afterwards.

His second Nobel Prize worthy finding was a method of sequencing DNA. DNA contains the instructions that tell cells what order the amino acids need to be put together in to make each protein. You can see that he liked sequencing things!

Without this innovation we would probably not be in a “post genomic era”. Back in the year 2000 Bill Clinton and Tony Blair announced that we had sequenced the human genome. I was 12 at the time and find it hard to imagine what science was like in the “pre genomic era”, I now take it for granted that I can just browse over to GenBank and look up a sequence to any gene I want. Sequencing technology has moved on and most of the sequencing done today uses very different technology to that which Frederick Sanger developed back in the 1970s, however, without his developments I don’t think we would be embarking on projects such as the 100,000 genome project.

I’ve undoubtedly not done his work justice in this short post. But I wanted to raise some awareness as to what a contribution this man made for science, and how modest he remained. 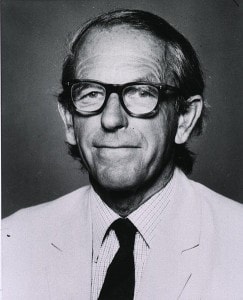