My stint in Parliament

Posted by Harry in Cell Physiology and Pharmacology on December 5, 2013

I am in the process of moving all my belongings back to Leicester after spending three months doing a placement in the Parliamentary Office of Science and Technology. The Parliamentary Office of Science and Technology provides independent scientific advice to both the House of Commons and the House of Lords. I was spending three months working on a briefing note about the transparency of clinical trial data, I’ll do a blog post on this when it is all done.

Despite working on the Parliamentary estate for three months some of the novelties did not wear off. I used the front entrance whenever possible, despite other entrances being more convenient; I made sure I used the cash machine on the estate so my statement said “House of Lords”; and standing outside for your drink despite the freezing weather, when else are you going to get to stand on the terrace? 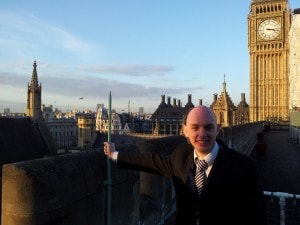 For some reason my friend told me to grab the lightening rod!

While I had quite a substantial workload associated with my project (which will be the topic of a future blog post), my supervisors were very encouraging about me making the most from my time there and experiencing as much as possible. Whether this was attending APPGs (all party parliamentary groups), debates in the chambers, or select committee evidence sessions. One of the oral evidence sessions I attended was the “Joint Intelligence Select Committee”, where I watched the heads of the 3 UK spy agencies give evidence to a panel of MPs and Lords. This did result in Michael White accusing me, in the Guardian, of being part of a doughnut. It was strange to see my face, or at least part of it, on the front cover of most newspapers the next morning.

The reasons I wanted to take this placement is because I wanted to know what happens in the apparent “policy black hole”, where policies are made that seem to go against all the available scientific evidence. There are a number of things I was going to write about, however my boss apparently read my thoughts and published them a few days ago (here) – doing a much better job than I could have.

However, there are still a few things that I would like to add about what I learnt during this placement.

There are 650 MPs that sit in the commons, one has an academic position, there are a few medical doctors, and a few more with science or technology related backgrounds. Therefore a number of them are unlikely to appreciate the scientific evidence that is presented to them. Contrary to popular belief this is not because they are stupid, although, as ever there are exceptions. Many come from backgrounds that I have no idea about.

One of the issues with science and politics is that science papers are always filled with caveats. You are likely to read phrases such as “…95% certain…”, and “…this statistically significant change is probably attributable to…”, however, politics seems to be a world where you need to be confident about what you are saying and any uncertainty makes it sound like you don’t know what you are on about. Any suggestions on how to change this would be greatly appreciated! This means that scientists need to think about how they are communicating their ‘knowledge’ to those in politics, I had a discussion with Professor Chris Rapley (ex director of the Science Museum) about this, and I don’t think we came up with an answer. However, recently I have been reading a number of papers from PLoS. Each of their papers is associated with a, lay, editors summary – I think these are a good example of lay summaries that are accessible, without losing the caveats that are so crucial to science.

It would be easy to say that we should have more scientists in the Commons, however, MPs are elected to represent their constituents. Only a small proportion of their constituents are likely to be scientists, in fact you could probably say that we are over represented in the Commons. If the scientific evidence supported something that was unpopular with their constituents (or more likely, some newspapers) then it is hardly surprising that they chose the other option. I guess the onus is therefore on the science community to ensure that our evidence is appropriately communicated.

The Westminster style of politics is far from perfect, I’m certainly not advocating a revolution like Russell Brand, but I’m sure it could be improved. One of the issues is that ‘we’, the public, are very good at criticising decisions after they have been made. I would like to urge anyone who has expertise in an area that is policy relevant to keep an eye on what is going on in their area. If something comes up that is relevant, submit evidence, or write to your MP. You can find out who your MP is on the aptly names “They Work for You . com“.

Having said all that, it needs to be remembered that whatever my, or your, particular strand of science is, it is not the only important factor in making a decision. For example one particular form of energy generation may be scientifically better than other, however, if the second would also result in a substantial increase in the number of jobs in an area then they may chose the latter. What does become annoying is when people attempt to justify decisions using science when the science doesn’t agree with them. I wish that people (not just in politics but in all walks of life) were transparent about why these decisions were made.

Then again, sometimes they just chose to ignore everything you say!

The Parliamentary Office of Science and Technology has approximately 30 3 month fellowships per year. I would thoroughly recommend doing one if you get the chance. I did a BBSRC policy placement.