Posted by Harry in Cell Physiology and Pharmacology on December 24, 2013

Outside of work I enjoy climbing and mountaineering and I’m an active member of the University of Leicester Mountaineering Club. Following some of the well documented “epics” of the last academic year I decided to go on a formal training course.

With some financial support provided by the James Brownhill Memorial Trust (for which I am very thankful) I attended Mountain Leader (Summer) Award training week at Plays y Brenin, England’s national mountain centre, based in Wales (no one is quite sure how that works).

The training put us through our paces, me especially considering my ankle had not yet fully recovered from my escapades earlier in the year. I’ve been to north Wales on more than 10 occasions and the weather has fulfilled the stereotype. However, for most of the week I had brilliant weather – I should obviously go to Wales every December! 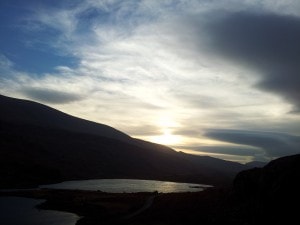 Day one of the course started relatively easily with a walk around Moel Shabbod but got progressively more difficult, with us ultimately having to find progressively smaller targets. Day two we moved onto the opposite end of the spectrum, scrambling up Seniors’ Ridge on Glyder Fawer, starting to think about how we would position ourselves to manage a group and finding out way.

The course also had a considerable theoretical aspect. Lectures covered predicting the weather (I had no idea how many different types of rain there are), legal aspects of taking groups onto the mountains, emergency situations, what equipment to carry.

Other practical sessions included river crossings (basically don’t try it), emergency use of a rope and moving casualties (hard work!).

The last two days of the course were taken up with the expedition, most of my previous expeditions have involved bagging as many peaks as possible or travelling as far as possible so it was a bit of a change to do one that was focusing on navigation. After spending the day in the shadow of Yr Wdyffa and navigating round the pipe used in the bond film “The World is not Enough” we set up for our wild camp behind Gladstone rock. After a quick dinner of packet curry we were on the move again, on a night navigation exercise on the side of Yr Arran. Just like day one of the course we were finding small rocks in a field of rocks – but this time it was in the dark!

Somehow the course had survived almost a week in wales without significant amounts of rain, a whole course without rain would have been unfair and the mountain gods did not hold back. The last day was filled with long and persistent rain, and high winds – we bailed from a summit attempt of Yr Arran and continued to do some micronavigation, this time in the typical welsh weather.

I must confess the minibus was a welcome sight and as soon as we got back we headed straight to the drying room and then for a prolonged shower before debrief.

With that the course had concluded, and I was back on my way to Leicester. For anyone thinking about going on one of these courses I would highly recommend them. Not only do they firm up your skills and ensure you are working to best practices, you get to spend a week in the mountains and meet some brilliant people.