Posted by Harry in Cell Physiology and Pharmacology on January 4, 2014

I came on to blog about something else, and in the process I came across a blog written by Regan about a virtual clear out, it got me thinking – am I a virtual hoarder? I started typing a comment, but when it came out this long (and over the character limit) I decided to post it as a blog post in its own right (and save the other topic for another occasion). The original post (linked above) was about the “Facebook cull”, the process where you go through and delete those “friends” who you don’t want on that list any more.

1) had deleted/stopped using their profile

When I finished my undergraduate degree in 2010 I decided to do a fairly ruthless facebook cull using fairly similar criteria to those described above, taking mine down from around 500 friends to 250. While there are a large number of ‘friends’ I could no longer name I do regret it to some extent. Over the next few paragraphs I’ll give you my thoughts on each of his “culling” criteria, and if I regret using them or not.

1) There are a proportion of the population that seem to survive fine without using social media. It continues to baffle me as to how they survive. I can only see two downsides to keeping them though. If someone was particularly worried about privacy it could be viewed as giving someone you had forgotten about access to your news feed. I’m personally not that worried about this (mine is fairly boring), but with facebook’s privacy features such as lists I think this could be well managed anyway. In addition if there is something that you are that concerned about people seeing – it probably shouldn’t be on facebook anyway! The second downside is that out of date contacts may get downloaded to your phone’s contact list (again, darn those people who don’t keep their profile up to date!).

2) I try and do this at the acceptance stage, as he suggested at the end of his post. However, sometimes people can get through. For example people you end up speaking to three times in one week before they disappear off the planet. I do delete these people, I work on the principle of would I (or more importantly, they) say hello to them/me if we walked past each other in the real world. If not then they may be deleted.

3) This is the criteria which I regret using. There have been people I have had on my news feed who I thought “I’ve not spoken to them in X years, they now live Y miles away, should I just delete them?”. However, it surprises me who I do end up speaking to again. For example I recently did a three month stint in London, and I ended up meeting up with a total of ~15 people who I had not seen in a while (some as long as 5 years). Following the status of “I’m moving to London” they got in touch, many were able to give advice as to where to live, one invited me to crash at theirs while I looked for somewhere, and they all offered to meet up for a drink. All of this certainly made moving to a new city less daunting.

I’ve also had friends who I have not seen in the past few years message me when they end up visiting Leicester (or my current location, wherever that may be), for example they may be on a conference.

For people who are in your current ‘immediate’ group of friends you are probably going to hear about the interesting bits of their life anyway through conventional means – for these friends Facebook is just a convenient messaging platform, and organisational tool (how did people survive before you could create an event for “Dinner round mine”?). For those friends who have fallen out of the “inner circle”, who are likely to live somewhere else, and you aren’t likely to see that regularly, Facebook allows you to keep “up to date enough” with them that you feel you can meet up when the situation arises, and so you know that the situation has arisen (as previously mentioned, none of those 15 London friends would have known I was in London without Facebook/Twitter).

From the ~250 people I ‘culled’ in 2010 I now know that two have since moved to Leicester (pre 2010 I had no link to Leicester). It would have been great to have known this and met up with them when they moved here rather than leaving them with the daunting task of moving to a new city, where they knew no one. These are two that I know about (from bumping into them), how many situations have I missed because I was too keen with the unfriend button? 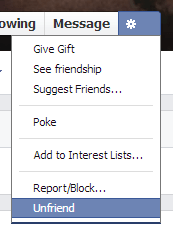 PS – to answer the initial question – yes I’m blatantly a virtual hoarder – my Google Drive even contains a copy of my Junior School homework, 89 versions of my undergraduate dissertation, and that useful timetable that told me where I had to go during my Leicester induction week – in 2010.

One response to “A Virtual Hoarder?”