Posted by Harry in Cell Physiology and Pharmacology on January 15, 2014

This evening I was flicking through twitter when I came accross this tweet from Simon Singh (@SLSingh). 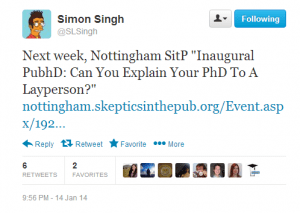 The link ultimately took me to the page for the Nottingham PubhD event. The concept for this event is not complicated – people sit in a pub, and three speakers explain their PhD in 10 minutes in a language that can be understood by all (even if they have had a few pints).

I think that these events are a great idea for a number of reason. The first being that I want to go. A pub and research- what could be better? I share a building with somewhere around 100 researchers (a very crude guess) and I have very little idea about what most of them actually do. This can’t be the best way to do research. The traditional way to bridge these gaps is by putting on lunchtime lectures, however, some of these lectures are very dry and technical. This makes them hard to follow if you are not familiar with the techniques or area of research, making attending lectures in other colleges almost impossible. Could this be a way to foster multidisciplinary collaborations?

That might be why I want to go, but the event is ultimately aimed at the public, not other researchers – I think that engaging with the public may get more people to value evidence. I’m usually one of the first to shout at someone when they whip out some of a homeopathic remedy, or the TV when it advertises some scientifically implausible beauty product based upon the great scientific evidence that 4 out of 6 women agree that they think it works. As much as it pains me, I somewhat doubt the rest of the world will join me in asking every cosmetic company to back up their advert with published data from a number of randomised controlled trials and the underpinning basic research. Having said that, cosmetics is a fairly benign example – someone spending £50 on a tub of cream that actually performs no better than one that costs £0.99 doesn’t actually have a dramatic negative effect on people (aside from the £49.01). However, some widely held beliefs are less innocuous. I’m not going to go into them in detail but things like the MMR-autism link, alternative medicines, and other quack interventions can have a dramatic negative effect on health. Engaging with the public may recruit a few more members to the “evidence police”.

And now a reason for everyone. While I was working in Westminster I managed to attend a number of in relation to climate science that were aimed at the lay public (like myself), these were short talks that were followed by an informal mingle. My knowledge on the subject beforehand was abysmal and clouded by some of the misinformation that is far too abundant. I’m still no expert, but (I like to think) I’m less uninformed about the area. I dread to think how many more areas of my knowledge need enlightening, I’d welcome the platform for someone to enlighten me and I’m sure that a lot of other people would relish the opportunity too.

Sometimes people can be fearful about or against aspects of our research, for example in the biomedical sciences this might include the use of animals in research, the use of embryonic stem cells, or transgenic (genetically modified) organisms. Like with climate science, I think this is partly down to the volume of misinformation that is available. If there is a wealth of misinformation, surely one of the best things to do would be to counteract it with a wealth of information about what we actually do?

In addition I’m fairly sure that every PhD student has benefited in some form from public money, even if it just through affiliation with the University. Showing the public what we do and why we deserve this money is probably a good idea at any time, especially when every area of public spending is having to justify its existence.

There are some other groups doing similar things. Bright club tries to make research comical (and based on some videos, sometimes it works, sometimes it doesn’t!). It appears that Leicester is actually the newest Bright club city, with two Bright club nights being trialled during the comedy festival. In my ‘googling’ for this post, I also came across the University of Leicester’s own Café Research, which seems to be a slightly more formal version of the event described above. I’m disappointed that I haven’t heard about them before – I’ll have to check out the first one of 2014 and report back.

If anyone wants to join me I’m strongly considering heading over to Nottingham next Wednesday to see how it works out, if it goes well does anyone want to join me in starting Leicester’s own PubhD?