A Change in Diet

Posted by Harry in Cell Physiology and Pharmacology on April 21, 2014

The hours required to get a PhD are pretty phenomenal, as they are in other professions. I aim to start work at 9 am and realistically start at 9:30 am. The days when I leave at 5 are few and far between, normally I leave somewhere in the region of 7-9 pm. On more than one occasion I have left to the sight of herds of people leaving Red Leicester. On one occasion I frightened the first UCAS tour on a Saturday morning when I was still wandering around the lab in a dishevelled state. I’m not the only one – there are still a number of people in the office/lab at 8 pm and I have bumped into colleagues at 3 am. On a weekend you can usually see as many people in as you would do on a weekday. On top of lab work I have marking, journal club presentations to write, lab reports, any reading (if I get time) and writing the dreaded thesis. In fact this blog post is being written as I’m procrastinating from doing a literature review (in the library at 8 pm on Easter Sunday). Holidays are few and far between, aside from the department closure days around Christmas and Easter I think I have amassed approximately 13 days off in the 30 months I have been here for – one of them was to have an operation (the two weeks recuperation time went out the window).

With all this it is very easy to feel like life is getting out of control. At the beginning of my second year I was trying to write my “APG report” (essentially the same as an undergraduate dissertation) around working the long hours in the lab. I was way in my overdraft (and not a nice cushy interest free student account overdraft), not due to excess spending or lack of income but because I was being paid into the wrong account and “didn’t have the time” to sort it out.

A few years later and I’ve developed (a bit) and now ensure that I have the time to do these basic “life management” tasks, look after myself, and have some form of social life! Most often by reminding people that I actually need to sleep!

I found that my diet can be one of the first things that I can let slide and too be honest it has been relatively poor since I started in Leicester. Gone are the days when I used to make myself a pack lunch for work every day. Instead it is usually a trip to one of the campus food outlets, but with experiments pushing back your lunch it is easy to miss “lunch time” (especially when Residential and Commercial Services shut the outlet in your building during the undergraduate holidays, the building that has minimal teaching facilities and is occupied with researchers who don’t have a 5 week Easter break!). This results in the classical lunch of a Twix, pack of Doritos, and a nutrigrain bar. You don’t need to be a dentist or dietician to realise that this is probably not the most balanced of diets.

Approximately 3 weeks ago our newspapers were covered with stories about “Fruit and vegetable intake: five a day may not be enough” [1]. I’ve not independently verified the research, but when I’ve been closer having 5 chocolate bars a day than pieces of fruit, something needed to be done. I made a new year’s resolution…starting in April…so maybe a new tax year’s resolution – to get my 7 a day.

3 weeks later – I have probably made it on about 90% of days (my other resolution of keeping track of my diet in ‘myfitnesspal’ fell by the wayside) – this is what I’ve found. 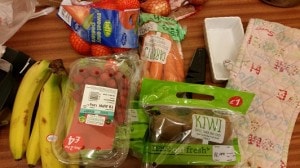 It is expensive! In the local supermarket 4 mars bars costs £1, a pack of 8 mandarins costs £2 with two mandarins being ‘a portion’. Similarly in ‘The IV’ (the nearest open food outlet) a fruit costs 55 p, a Mars bar or pack of Doritos 65 p. If I’m doing the 2:45 pm trip to buy some food before the café closes one mars bar will sustain me for considerably longer than one banana! Midway through the month the balance of the credit card I use in supermarkets is considerably higher than it usually is at the end of the month.

Not only is it more expensive but it is considerably more effort. Despite the prevalence of Tesco Metro, Sainsbury’s Local, and COOP sized shops in Leicester there aren’t that many large supermarkets in my area of Leicester with the closest Morrisons, Sainsburys, ASDA, and Tesco all being approximately 2 miles away – without a car that would have been a reasonable walk with those bags. Before my health streak I did a fortnightly supermarket delivery, the chocolate bars are still be edible after a year of hiding in the bottom of my bag. Fresh produce not so much! I now make an inordinate number of trips to the local small supermarket 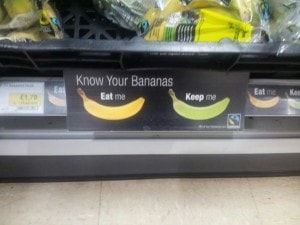 In case anyone was unclear as to how you should eat your bananas they have kindly provided you with a number of useful and informative signs(!) What they fail to mention is what to do with the slightly brown bananas that they usually sell. A nice banana sits in a narrow band between a crunchy banana and a squidgy mess – the same can be said for most fruit and veg. I’ve found that since changing my diet the amount of food I’m throwing away has increased dramatically, although this has improved with time as I re-learn how to manage my cupboards. The problem is increased by the fact most of the local supermarkets only sell their fruit and veg in bags (as you can see in the photo above). Sadly the situation is no better, or worse, in independent green grocers or market stalls. The common practice seems to be to sell fruit and veg by the bowl, which is larger than a bag and they appear to go off in about half the time (probably says something about what supermarkets do to their fruit and veg). An apple a day may keep the doctor away but when you can only by 8 at a time with a best before date of 4 days you need to eat an average of two per day. When you can only buy 3 courgettes, 8 bananas, or enough mushrooms to feed the Swiss navy it means I either eat a lot when they are past their prime, or end up throwing them away. 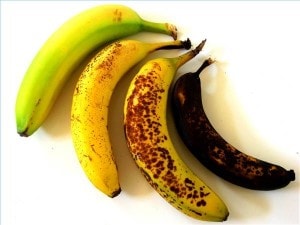 I have also become increasingly aware of the number of ‘food miles’ I have been consuming. When my strawberries came from Spain, grapes from Chile, and raspberries from Morocco the miles soon add up, along with my carbon footprint. Having said that, the reliable news source that is the Daily Mail suggests that some of Cadbury’s chocolate is made in Poland, and I’m sure the raw ingredients are probably transported all over the planet before they end up in our vending machine – allegedly the average distance a mars bar travels is 3,262 miles, although I’m not sure how this was calculated [4].

Now I’m getting my 7 a day the big question is do I feel any different? Not really! I guess the answer may be the difference it may make in a number of years time. The biggest difference I’m noticing is that it feels nice to have another part of my life under control. As I said in the start of this piece, it is easy to feel like you’re out of control with your life, making some relatively small changes can actually have a dramatic effect on this.