It’s that time of the year again… varsity, so get your bevs ready as UoL get prepared to beat DMU once again!

Varsity is the time of the year where the rivalry of DMU vs Leicester peaks, and it’s definitely not one to miss! With so many sports going on there’s something for everyone- and even though the cold may seem off-putting, you’ll regret it if you don’t go!

The big match is Rugby which sees both the women and the men take on DMU at Leicester Tigers stadium.

However, it’s not just all about rugby! There’s other sports such as Lacrosse (the best one obvs, as I’m playing), football, American football, hockey and loads more! So get yourself down to Stoughton playing fields/ the Astro to cheer on Leicester as we prepare to defend our title once again.

Events run from Wednesday 7th to Wednesday 14th and most of us have Wednesday afternoons off, so there’s plenty of time to catch UoL winning some games! Don’t forget warm layers, drinks, and plenty of Leicester spirit to cheer on the gals and guys playing. 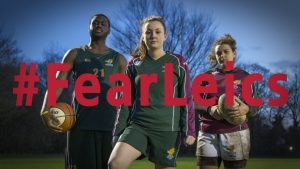 Hello, my name is Katie and I am a final year Chemistry student (yes, can't quite believe it myself!) I will be blogging about what I get up to in the Chemistry department and how to balance workload with sport. When not in lectures, even though it does seem like we spend all our time in them... I'll be either in the gym/ out at Mosh/O2 spending money on countless VKs (obviously tropical/ orange as green VKs are horrid!) I am also both dyslexic and dyspraxic, so will give an insight on what it's like and what you can do if you too have been diagnosed with a specific "learning difficulty" of similar nature.