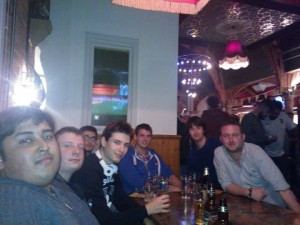 As the title says – “Work, work, work, football and more work” – a thorough explanation of my weekly routine at University. The reason I mention football isn’t just to do with myself playing football, but also to do with the fact that England qualified for the World Cup yesterday (wooooo!).

So, did you watch any of the matches? I only watched the match against Montenegro. Myself and a few members of the Computer Science football team got together at the Loaded Dog and watched the game. It’s always much more fun to watch sports with your friends. It adds a completely different atmosphere to the entire match.

I unfortunately couldn’t catch the England vs. Poland game because I went to the Highcross Student Takeover instead which as always was infested with thousands of Leicester students looking left, right and center for all sorts of tasty discounts on offer. I did however walk past the Sky booth the second Steven Gerrard scored England’s second goal… the cheering was so loud I thought I was actually sat inside Wembley for a second. Two of the things I bought were Leicester City shirts. At £5 each, you can’t really go wrong.

But yeah, that’s about it for this blog post. Did you go to the takeover this year? If you did, what did you buy? Who was your England man of the match for both matches? Let me know in the comments below!