Posted by Karam in Informatics on November 27, 2013

My previous blog post promised a review of my new Samsung Series 3 Chromebook from a Computer Scientists point of view. So here it is.

The laptop is one of the thinnest I’ve seen and unsurprisingly also one of the lightest I’ve ever held, making it unbelievably ideal for taking back and forth from Uni. It comes built in with a 16GB solid state drive, 2GB of DDR3 RAM, a dodgy ARM processor and the even dodgier Chrome Operating System.

If you’re unfamiliar with Chrome OS, it is basically a glorified web browser. If you’ve ever used the Chrome web browser before, all you have to do is basically imagine that with a windows-like task bar at the bottom of the screen.
The operating system only accepts Google applications, meaning things like Skype and Microsoft Office are a lost cause, let alone Java development. If you want to do word processing, you’ll be forced to using Microsoft’s online version of word. If you want to save to the cloud, you’ll be forced to use Google drive. Need I say more? Chrome OS well and truly is a pain for us Computer Scientists who are much more fussy about these silly computer-related things than other students. Even though to be fair, I’m using Chrome OS to write this… so it can’t be all that bad surely?
If you’re an English, History, etc, student who just needs something beautiful, cheap and light to surf the net and word process on… then look no further.

The question now though is why I have called this post “my little Ubuntu machine…”.
Well, if you haven’t guessed by now, I’ve managed to install Ubuntu on my Chromebook. Chrome OS is actually based on Linux itself meaning other Linux based operating systems are possibilities.
A Google employee who goes by the name of David Schneider created a Chromebook plugin called Crouton which allows users to switch between Chrome OS and a chroot environment of Ubuntu (a bit similar to running Windows with Ubuntu in virtual box simultaneously).
Installing Ubuntu alone takes my Chromebook from being a lousy old semi-useless Chromebook to being a full on awesome Linux machine. Meaning I suddenly have access to tons more applications – specifically Computer Scientist applications – such as Eclipse, Netbeans, Dia and more.

The installation process was smooth, however a bit daunting as Google haven’t made the process mentally easy. Before you do anything, you have to enter developers mode on your Chromebook which is basically a bit like a super secret magical admin only mode which must only be used by those chosen by the Google Gods…
You go through about three or so different warning messages before your Chromebook flashes before your eyes to a black screen with super epic white writing running up the screen.
On a serious note, entering developers mode will allow us to access special features on our Chromebook which – as you may have already guessed by now – are reserved mainly for Samsung employees or Google employees. However in the world of technology, we like to include ourselves in the mix as well since let’s be honest… what are Samsung or Google employees compared to a University of Leicester student? They’re nothing compared to us. We’re tougher and rougher fighters. Our habitat being the Charles Wilson 301 labs of doom. If you can pull off an all nighter in them, you can do anything you want and righteously deserve the respect of all those around you.
Back on topic, once developers mode has been enabled you’ll go through a daunting operating system verification message every time you open the laptop. You can either wait 30 seconds or just press CTRL + D to skip it. If you press space your laptop will kick back out of developers mode and your hard drive will be wiped clean… so be careful. Next you follow the instructions to install crouton, choose your release (I just went for the good ol’ 12.04 LTS) and choose your environment (I went for Unity, however you have lighter options such as xfce available to you). Once the installation goes smoothly, you can then switch between both Chrome OS and Ubuntu by holding CTRL + ALT + SHIFT + <– (F1).

Now, when I first bought the laptop, I pretty much had no idea whether Java would run on it or not. Fortunately for me, it did… and BOOM my little programming machine was born for peanuts!
Simply download the Oracle Java 7 ARM version of the Java JDK, install it normally through command line as you would on any other operating system, change your system’s default Java directories and then test the java & javac commands.
Regarding IDE’s, Eclipse is unfortunately a big no no at the moment. The ARM installer from their website didn’t exactly work properly so you’d have to settle with the version available to you through the Ubuntu Software Center. Now, the software center version of eclipse installs fine, but for whatever mind baffling reason it decides to overwrite your installed version of Oracle JavaJDK with OpenJDK. It might work if I were to create a simple .sh executable file to overwrite OpenJDK manually back to Oracle JavaJDK, but I am yet to test it as I haven’t had much time to experiment yet.
Instead, I opted to give Netbeans a shot. That worked fine as long as I didn’t compile from within the program, rather compile and run through Ubuntu’s terminal instead. After about 10 compiles in Netbeans, OpenJDK magically emerges out of nowhere again. 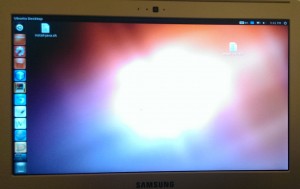 But yep, that’s about it. I don’t know what else to say really as this post’s word count is already exceeded 1000!

Thanks for reading!
TL;DR (too long; didn’t read) – Buy a cheap chromebook, install Ubuntu on it & turn it into a lovely little versatile programming tool.

2 responses to “My little Ubuntu machine…”