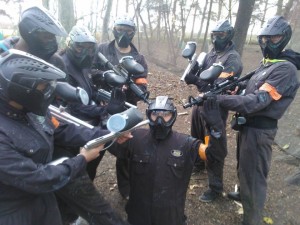 A lot of my blog posts seem to be made up of me complaining about the workload the beloved Computer Science department throw at me. So I’m going to prove to you all that the end of semester does indeed get slightly better!

As you can see from the image above, we all turned into a bunch of dangerously armed maniacs as a side effect of too many assessed class tests in the same week.
However on a serious note, some of us needed to let off some steam… or paint (terrible, I know). So we decided to go paintballing thanks to the awesome people at Deltaforce Kegworth!

Deltaforce are without a doubt the UK’s #1 paintballing company & to be honest they love students – especially us Leicester students. They normally come to campus for around two weeks an academic year to sell largely discounted tickets at special student prices, so make sure you keep an eye out for them.

The arena was a 45 minute drive from the O2 academy infront of University. A 12 seater minibus only costs around £50 one way, so individuals only pay around £10 each for travel both ways which is pretty cheap for a fun day out.

Long story short, paintballing will cost you more or less the same as a night out. I strongly suggest any current students or future students give it a go. It’s great fun and a very good way of venting out any anger you might have built in from the semester. 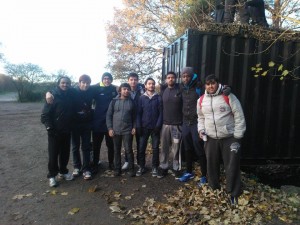