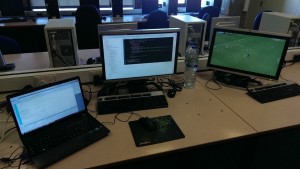 …yes, all three screens were being used by myself at once.

If you were watching the football this weekend, you’d know what I’m on about!
That’s right… Burnley finally managed to beat Blackburn Rovers after 35 years.
What is arguably the most fierce football rivalry within the United Kingdom unfortunately didn’t exactly go my way… you guessed it, I’m a Blackburn Rovers fan.
I think it’s probably safe to say that I gave a large number of people the fright of their lives when Jordan Rhodes’ opening goal went in. I wonder if I can get the CCTV footage of my celebration…
Having spent far too many complete days working non-stop within the Charles Wilson labs as a deadline approached, the last thing I needed was for the loss to happen. But oh well, life goes on… right?

Carrying on the football agenda of this post, believe it or not FC Squared (The Physics & Computer Science) football team finally won a match! We managed to beat History FC 4-1. I was disappointed not to keep a clean sheet as the goalkeeper, however despite that the match will definitely go down in the University of Leicester history books for both departments.

That’s it for now guys. The workload really is hectic. I’m sure other departments don’t work as much as us Computer Scientists do… and if anybody wants to argue that then feel free to comment below.
If you don’t want to argue and just fancy a chat or have a few questions about the University, you know where the comment box is!