Have you ever climbed a waterfall? Clinged on to wet rocks with just your finger tips? Seen a big Highland Cow and heard it go Moooo? That’s what I did this weekend with ULMC (University of Leicester Mountaineering Society) in the Yorkshire Dales and despite the random Northern British weather I had a great time on my first ‘meet’.

The weekend started with a 3 hour drive to Yorkshire leaving uni at 6pm and an early night for most people ready for a good day of climbing on the Saturday. Me and Ben spent the first half of the day with Captain Grunt or Captain Cuddles as I’ve renamed him because he always seems to be hugging somebody, when he’s not hanging off a wall or a table. After a couple of failed attempts to lead a route due to the wet rocks, Chris managed to set up a good lead on a wall I’m happy to say I pointed out, which I believe he said was a 5A (I’m still learning the grades). I remember he had to do the splits twice to get up there and 2 pieces of his gear fell out of the wall (pieces of metal which you slot into the rocks are called gear, their used to attach rope to when leading a route) which meant that if he had fallen, it probably would of hurt a little. A few of us spent the afternoon trans-versing the rocks, which is like climbing but without a harness or rope. The sun decided to grace us with it’s presence during our afternoon climbing which provided a nice view once we reached the top and also made us realize how hard it is to climb on wet rocks. Unfortunately the rain persisted and we had to go back early around 3pm. We spent that evening getting very drunk and playing ‘table top traverse’ which is a lot harder than it sounds….

The rain was heavier than my hangover the next morning so we decided to go for a hike through the Yorkshire Dales National Park. This was the first time I’ve been for a hike since I was a young and we saw some amazing views. We also found some pretty daring sport climbing routes, here’s some pictures so I can point them out: 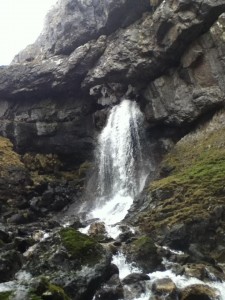 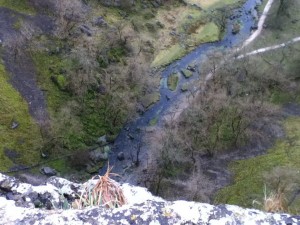 Trad climbing is what I mentioned before about putting ‘gear’ into the rocks, then attaching a carabiner and rope to lead a route. Sport climbing already has bolts screwed into the wall to attach your rope and is a lot more daring because the bolts are spaced far apart, which means a bigger fall. There are bolts attached to the limestone wall in the first photo (limestone is also slippery which makes it even harder to climb), a sport climbing route going over the top of that waterfall and the 3rd photo is the view from the top of the limestone wall.

The highlight of the day was climbing the waterfall, which looked a little daring at first but turned out to be OK if you avoided the slippery rocks. Here are some more pictures:

The panoramic shots were taken with an app on my iPod Touch so I apologise for the chunky outline. 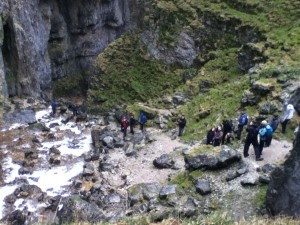 The last bit of sight seeing for the day was the Highland cow, which we all clapped and cheered when it mooo’d, then wondered why, as if we were expecting it to meow like a cat or cluck like a chicken… 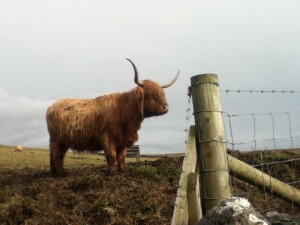 I will try and make it to the final trip this semester, and if I miss that, I will certainly go on the end of the year ‘meet’ to Portland! I’m excited thinking about it!

Being a Criminology student is all about questioning society and getting to the heart of an issue. While some Criminologists would argue that we should remain an outsider to those we study, others would argue that it is impossible to study crime without being integrated into the Criminal world. An example of this is the Positivist versus Cultural perspectives of Criminology. No matter where you stand as a student, it’s good to get away sometimes to breath the country air and come back with a fresh perspective.

Matt has now graduated from the University of Leicester and is no longer blogging for this site.