Posted by Hannah in Criminology on November 28, 2012

So we have all heard of the Ritz and the Savoy but I bet there are very few of you who have heard of the White Rabbit Teahouse in Nottingham. Well, I went to visit a friend from my hometown who goes to Nottingham University and over the years she has taken me around Nottingham to see what it has to offer. On this particular visit I was taken to this teahouse and it was lovely, with very traditional cups, saucers and teapots and a place I would recommend to anyone who wants to venture somewhere nearby, but not far enough to be easily stranded. 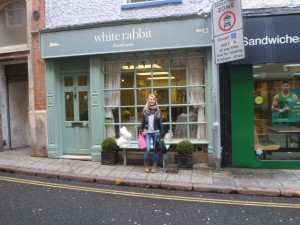 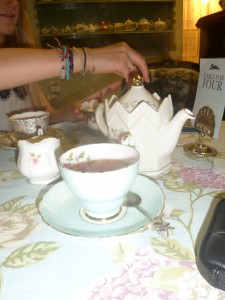 In terms of visiting friends from home, I have found that at times it can be difficult to visit and stay in touch with people, as there is always just so much going on in Leicester. I know many people who have travelled to the opposite end of the country to visit friends and some who have very little contact until the breaks at Christmas and Easter. It’s also a great idea to see how other cities operate and how the Universities are structured, as some things available to students in one city may be an idea to bring back to Leicester to improve, for instance, a particular society. Furthermore, it is great way to meet new people, which is one of the main benefits of student life! I was very lucky as one of my friends went to a university very close to me and so train journeys aren’t so bad either. As a student, I definitely think trains have become like second nature, and considering usually I can easily get lost between my house and the other side of the road, the rail system is ok once you get the hang of it! Personally, I am really looking forward to the break at Christmas; essays will be handed in, I no longer have to be in a house which may as well have no walls with regard to the temperature and I’ll be reacquainted with old friends for a good catch up in the pub.

On to a more academic topic, I was lucky enough to have two guest lecturers in one of my modules this week; one who is a prison officer and another who works in the probation service. This meant that although we learn all about the theoretical side to working in these types of jobs, we also have the opportunity to hear about how the job works in practice. Personally, I found both speakers very interesting, but particularly the prison officer, as that is what I am thinking of becoming. The prison officer spoke to us about first hand experiences she’d had and the types of prisoners she had encountered. In particularly, she showed us three videos of different prisoners coming into the prison, which showed the emotions of both first time offenders (who tended to be nervous and quiet) and repeat offenders (who tended to be more chatty and confident). The third video shown to the group was a prisoner who could have a potential personality disorder. The person in the video was very different from the previous two and it was shown how these offenders can find it difficult to communicate effectively to others. This really made me think about how a person with a personality disorder would be able to cope in prison and also how officers within the prison approach prisoners who are developing a disorder.

Hannah graduated from the University in Summer 2013 and is no longer blogging for this site.