December in Brief… and Kasabian!

Posted by Thomas in Criminology on December 30, 2013

As Christmas time approached, Leicester for Students always becomes busy; as touched upon in my previous post about the academic requirements for BA Criminologists. However several other events are notable for students and the residents of Leicester alike.

Firstly, there was the Clarendon Park Christmas fayre, which sees Queens Road pedestrianised with many Christmas stalls set up from local businesses. With a great selection of food, gifts and a general showcase of shops and products that students perhaps may not normally see, it was certainly worth popping down on a cold Sunday afternoon for an hour or so. Staying with a Christmassy theme, it is well worth checking out around High Cross December time if you can put up with the Christmas shoppers! 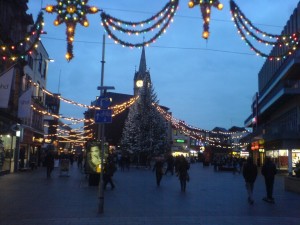 However, for me the biggest news this December was the announcement of a huge homecoming gig by local heroes Kasabian! The event is due to take place next June, which coincides with the end of my degree! The lads who can often be spotted around the Clarendon Park area, will be performing on Victoria Park which is next to the University! This will be the second time Kasabian have come to LE2 in recent years, with them performing in the 02 Academy in Autumn 2011 during my first year. On that occasion we queued for around 12hours to get our hands on the prized £20 tickets, but this year no queuing thankfully!

For more information on the event; check http://www.demontforthall.co.uk/events/events.php/2014/1184/kasabian-are-coming-home/

In case you have forgotten, or just need reminding; here are some videos from that gig and some of their hits.

See you at the front!