As someone who has a keen interest in both sport and current affairs, Sochi 2014 has been an area of interest for quite a while now. While it is not uncommon for big sporting events to acquire a shadow from political clouds, these winter Olympics are the largest that I have seen in my lifetime. Due to the complex relationships between Russia and the West, awkward comments and calls for boycotting were inevitable and there are many areas of Russian behaviour in recent years that could have been the result of this, such as Involvement in Syria and the recent Ukrainian crisis. However, it has been homophobia that has been drawn to the world’s attention in Russia.

Many countries are still struggling with gay rights in the 21st Century. With homosexual relations only being decriminalised in 1993 and it’s capital holding a ban on gay pride marches for the next 100 years, Russia is no exception. While it is a sad reality that progress legally and socially is slow in terms of acceptance of homosexuality and rights for those individuals, it has been the recent change in direction and speed in which it has occurred that has caused great worry for many human rights and gay groups worldwide. In June 2013, the Russian Parliament passed a law, under the justification to protect minors, which ultimately bans the promotion of any untraditional sexual relations. These fines not only apply to individuals, but also companies. This now means general expressions of homosexual behaviour in Russia can now be punished and there are fears that with the loose wording of these new clauses, their application can be used whenever the government please, including the internet. 6 men were arrested for holding up signs saying “gay is normal” outside Moscow Library, which shows the extremes in which this law is being enforced.

Alongside rising tensions around the law, a huge rise in hate violence against LGBT individuals has been reported. A country that already has no laws against sexual discrimination, has been seen to turn a blind eye to skinhead violence as Police have failed to respond to LGBT incidents. This is while a disturbing increase in neo-Nazi vigilante gangs has been seen, who kidnap and brutally assault young gay men under the pretence of fighting paedophilia before putting it on the internet.

Unsurprisingly, worldwide condemnation has followed on these policies and the general road Russia seems to be taking. Social media has been a key instrument in this which has helped tell the world of what is going on behind closed doors, yet it is the media which is Putin’s most powerful weapon by using it to promote Russia on a worldwide scale. So what should be done? Boycotting the Olympics is a huge decision and is also unfair on the athletes who just want to perform on the world stage that they belong to be on. The answer, found by many, has been showing LGBT groups and people in Russia great support through the Olympics, simultaneously giving Putin the finger as well!

Below, is an example of some of the courageous and ingenious ways in which individuals and companies around the world have shown their support. 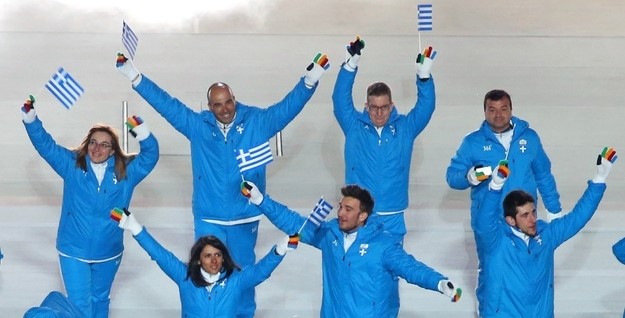 Greece entering during the Opening ceremony each with Rainbow tipped gloves.

The Guardian’s logo on their website has also followed the rainbow theme of support.

While those are all admirable and rightly have been recognised, I have saved the best until last. Channel 4 top the list with this funny and unsubtle 90 second feature which has been aired throughout the first week of the Winter Olympics.

For more information, check out these links:

The Facts on LGBT rights in Russia

Gay parades banned in Moscow for the next 100 years

Thanks for reading. If you have any questions or views on my blogs, feel free to comment!