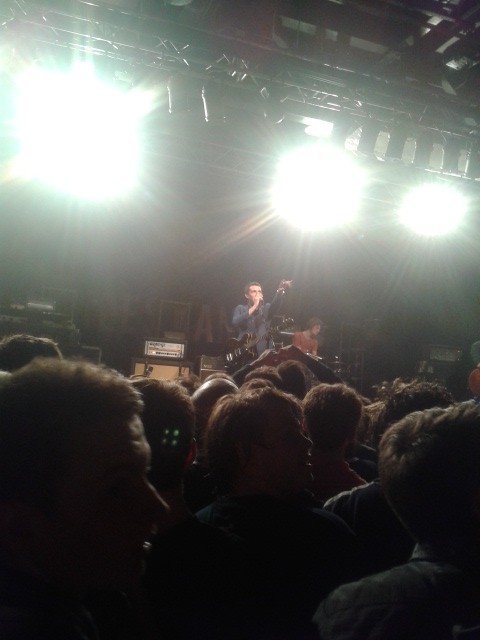 I haven’t been to as many gigs as I wanted to since coming to University, but it’s worked out that ones I have been to have made up for it. After seeing Kasabian, Fossil Collective, Ben Howard and now Miles Kane all for under £20 in my 3years at the University of Leicester it shows that students can still go to gigs of good bands without paying ridiculous amounts.

While not being a huge fan of Miles Kane before the gig, I thought why not and went along. Due to the shape of the academy,the balconies and the fact it was not completely sold out; it meant that in front of the stage was not completely rammed which was a nice change. Miles Kane came on stage to a great reception, including from several members of Kasabian who were watching in the wings. As chants for Leicester City echoed around the academy, Miles Kane and his band got off to a quick start as they opened with their debut single from 2011 ‘Inhaler’. As the set-list progressed, it passed through tracks from both his albums ‘Colour of the Trap’ and his most recent album ‘Don’t Forget Who You Are’, and also music from his 2 Ep’s. His dress, manner and voice gave a lot to his fellow Liverpudlians The Beatles and also to his former partner Alex Turner who’s strong influences were there for all to see. The picks of the set list were unsurprisingly the anthemic singles of ‘Rearrange’ and ‘Come Closer’, although prior to these ‘Give Up’, which featured a huge excerpt of the Stones’ ‘Sympathy for the Devil’, was perhaps my favourite. A 2 song encore followed, finishing with an acoustic version of ‘Don’t Forget Who You Are’ which left the Leicester crowd in high spirits. Despite no cameo’s from the onlooking Kasabian members which was probably a bit optimistic, the show was entertaining and of good length; Miles Kane playing for almost 90 minutes.

In all, a great gig which demonstrated the opportunities which students have with the O2 academy being at the heart of the students union. It is well worth keeping an eye out on any upcoming listings to see what is on! Current Students should also make a note to stop by ‘The Point’ every now and again as it stocks student tickets for the O2, Leicester City and Leicester Tigers