A Different Kind of Home 5,452 Miles Away

Posted by Frances in Criminology on August 31, 2015

Last night I returned back to my dorm (After writing about the ups and downs of having nowhere to live for Study Abroad in my last post, I got my housing 8 days before flying here!!) following an adventurous day in which I finally realised I feel comfortable in this new, exciting and terrifying place.

Two weeks ago, after about 24 hours travelling, I touched down in the States for the first time in my life. Every little encounter with everything has been slightly nerve-wracking for me as I’ve become more aware of the slight differences in social etiquette and social norms. Crossing roads was such a nightmare for me; another exchange student and I pushed the button too many times before finally feeling brave enough to cross and to figure out that a white man meant go and a flashing hand or a countdown(!!) meant “finish crossing this enormous road quick!”. But two weeks later and I’ve started to notice how significantly more chill I’ve become about crossing roads. I also learnt that in California, pedestrians have right of way, so cars, for the most part, have to stop for you when you want to cross and the little “thanks” gesture Brits do is kind of superfluous here, but I’m still doing it. 🙂 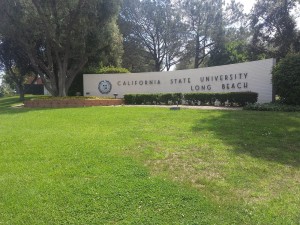 Other than noticing my enhanced ability to cross roads, I used this past weekend to explore a lot of Long Beach and therefore familiarised myself with Californian shuttles and transit buses. I’d previously found the idea daunting because of the slightly different systems which I felt could have caused me to get stranded on some numbered street somewhere in the middle of nowhere I recognised with Americans using terms, like ‘blocks’, which are still beyond me (but I’m getting there!). But after yesterday, I found myself sitting on a shuttle cruising along Pacific Coast Highway at night with no one but the driver and I and some lovely music perfect for driving, and I had one of those nice little moments where I felt like I had finally found my own way in California. There is still so much to learn and experience, and I’m still the clueless British girl when I try to do some new things, but it’s so much fun learning and becoming a part of how immersive Study Abroad is.

After just two weeks here, I have already done so, so much, and I’ve barely had a minute to catch my breath, but there isn’t enough space in one blog post, so hopefully I’ll be able to describe more of my experiences in my next blog posts. 🙂