‘Dorm Life’ – Having a Roommate for the First Time

Posted by Frances in Criminology on September 29, 2015

To be honest with you, I wasn’t originally enthusiastic to have a roommate and it had been one of my main reasons for considering living off campus during Study Abroad, since double, or even triple, rooms are most common in college dorms and are stereotyped as a fundamental part of experiencing ‘dorm life’. My aunt told me that when she had been at University of Leicester, it was most common to share a room, and it’s shocking how much I’ve taken for granted being able to have my own room for the first 19 years of my life. Before moving to California, I freaked myself out a little bit with dramatic Youtube videos about horror story roommates and looking back on it now, I think my imagination exaggerated the problems that having a roommate might incur.

My first week at CSULB was International Week, so none of the American students had moved in yet and living in dorms alone was a stark contrast to how I’ve been living the last six weeks. The set-up is different in almost every building, but my dorms are set up in a suite style, sounds fancy right? Haha no. Six to seven girls share one shower, one toilet and two sinks… with no lock on the bathroom door and we start off as strangers. For the first week I lived alone in a temporary suite with 3 bedrooms and although sort of creepy, I got accustomed to the freedom. I moved into my permanent suite the day before move-in day, and I woke up the next morning hit with the shocking reality that my roommate, whom I hadn’t even met yet, could walk in freely while I was sleeping or changing, at any moment!

I had decided to be super cute and bring my roommate some Yorkshire Tea and McVities chocolate Digestives so she’d be forced into a good first impression of me hahaha! And eventually, I psyched myself up to say hi to my new suitemates and when my roommate arrived, I got to meet her whole family! And she brought several items, such as a giant fan, microwave and mini fridge, which would have been difficult for me as a semester abroad student, so I am grateful! 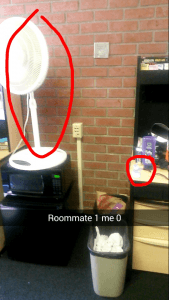 Photo is a little unclear, but the tiny speck on the right is my handheld fan :’)

I was lucky enough that most of my suite mates were returners so knew a bit about how to do things, and that night my roommate drove us (almost everyone has a car here!) to a restaurant area and I tried my first Korean BBQ, bonded with my new suite mates and learnt how to use chopsticks. 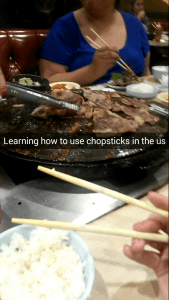 Since I’ve never shared a room before, for the next few days, I was really unsure about how I should do things without annoying my roommate! At first, I got ready for class in the bathroom every day because I was too scared to wake her. Weeks later, and all my worries are completely gone. Somewhere along the line, everything just gelled into place. And recently, we did a compulsory roommate agreement in which we were able to discuss any concerns such as what we’re happy to share. And although I love spending time with my roommate and now find my room a little lonely sometimes when she’s not there, I still find plenty of time for myself when she goes home some weekends or when she has evening classes, for example. And my roommate’s family have even invited me to spend Thanksgiving with them, which I am really excited to experience in true American style! Having a roommate has actually worked out super well. 🙂