I decided that while studying in the USA, I might as well get as involved as I can and try out a club or society, and what better thing to try than something so traditionally American? I went for cheer and while it’s been amazing learning how to cheer both for performance and for games, it’s also opened up a ton of other opportunities and I made lots of friends.

The cheer team held a couple of socials such as an evening in Pieology, which is basically a Subway for pizza where you make your own pizza (One of the most amazing things America has to offer in my opinion) and a beach bonfire including s’mores and more pizza! Next week, we’re also due to have this semester’s banquet where everyone dresses fancy and iceskating is planned afterwards, which is in celebration both of winter and of the numerous ice hockey games we all cheered at.

Unfortunately CSULB doesn’t have an American Football team, so the cheer team cheers at a number of other club sports games depending on the season. This season, these games were primarily ice hockey and soccer. The ice rink was freezing so we wrapped up super warm and eventually got our own cheer jackets with our names printed on! It was a lot of fun dressing up, reciting cheers and throwing our poms about while also getting free access to the games we cheered at. It was really nice to see the varsity side of the American college experience, and after the last home game, a couple of us also went to a kick-back where we got to hang out with a couple of the hockey players. 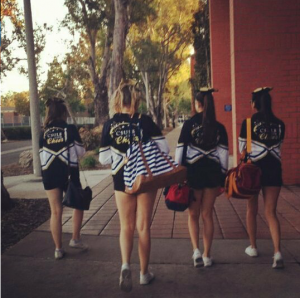 Since the American Football team at CSULB disbanded, basketball has been the main sport for CSULB, so Homecoming was structured around a basketball game. CSULB has two cheer teams; the athletic team and club cheer, and due to being completely inexperienced before August of this year, I thought trying out for the athletic team might be a little over-optimistic. At Homecoming, Club Cheer is allotted a time and area for performance just before the big game starts, so we spent several weeks before practising our stunting and dance routine. When the time finally arrived, I was more than nervous but the performance happened so quickly and felt so much fun to be a part of.

Now that Homecoming is finally over, and only three weeks remain of the semester (Where did that go??!), we’re spending the rest of our practices learning new stunts just for fun, and I’m finally getting to spend more time learning to fly. 🙂 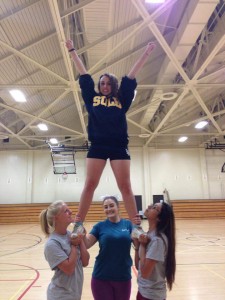 What started off as a little go at trying something traditionally American has become something I really enjoy, and I’m questioning why I didn’t start cheering sooner when I had the opportunity at Leicester. Leicester offers countless societies, one of which is cheer, and I’ve already started enquiring about joining the club as soon as I can when I’m back. 🙂