Today is Sunday, which means tomorrow is Monday, which also means classes start again for me tomorrow after having had over a week off for Thanksgiving. As my friends have educated me, Thanksgiving was originally intended as a time to give thanks to the Native American population who, thousands of years ago, helped the first Pilgrims to America learn how to survive, who then thanked their guides by doing all kinds of horrible things to them. Modern-day Thanksgiving is far removed from such contentious connotations. Now it seems more of a time for family and friends to get together and show that they are grateful to have each other, and then to eat a lot of really good food.

After an amazing 6 days in San Francisco (which I will probably talk more about in a later blog post), I went to stay at my roommate’s house to spend Thanksgiving with her family. It was such a lovely and heart-warming occasion. We went to my roommate’s grandparents’ for the daytime of Thanksgiving, and their house was like being in a movie. I wasn’t convinced it was real for a good few minutes. The architecture and Thanksgiving decorations down to the pumpkin shaped candy corn felt so much like something from a holiday movie. 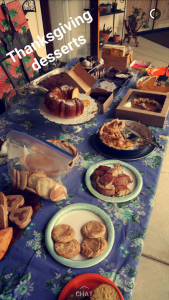 As the day went on, more and more of the family showed up and everyone was so welcoming and fun. They even had various teas ready especially for the English visitor :). In many ways, it made me realise how much more I miss my own family, but it also made me realise that much more how thankful I am to have been able to study internationally and to spend a traditional American holiday in a traditional American home.

2 responses to “Giving Thanks on Thanksgiving”