It’s Beginning to Look a Lot Like Christmas in California

Posted by Frances in Criminology on December 16, 2015

What with Finals until the end of the week before Christmas and being such a Christmas junkie that the thought of spending Christmas alone and away from my family feels like the end of everything, I’m flying home far earlier than I’d like. If I could do everything truly my way, I’d be flying back and forth between home and Leicester and California as frequently as a normal person goes grocery shopping. I truly love California and there is still a never-ending list of things I want to see and do here, but the more time I’ve had away from home since University, the more I’ve gained a pleasant nostalgia for home, and I’ve made a similar second home in Leicester since coming to California.

That being said, I’ve still spent almost every spare moment not studying for Finals, making excuses to experience America at Christmas time. One night, a friend and I took a ‘study break’ to visit Naples Island and watch the Annual Holiday Boat Parade. It was beautiful and as one of the last things I did in California, it was such a lovely evening to have spent. We stood on the bridge as boats lit up in bright and festive colours passed by singing Christmas songs, waving and chanting Christmas greetings to us. We also went for a little walk down the sand along the river, which turned into a long walk after we reached the end and realised that we’d gone the wrong way and had to walk all the way back. But we walked back through the streets instead and after having seen all of the stunning river-side houses with their parade parties spilling out of their back doors, the walk back was a contrast; much quieter but the houses just as lovely, but in a more ‘homely Christmas’ way.

And when we finally reached the heart of Naples Island, it was pretty late at night by this time, but Christmas parties were still going and a couple of probably drunk party-goers were jumping into the river. The festive decorations on the houses were some of the most magical I’ve ever seen and although the residents were generally a little older, due to needing to be pretty wealthy to afford these houses, this area was the liveliest of the night. We’d already stayed out later than we planned, so we then made a slightly spontaneous trip to Ruby’s Diner (which I’d wanted to go to for the longest time, but thought I’d lost the chance), and it was emptying up due to closing time but it was so authentic and I loved everything about that place.

And tonight was my last night here in California, which I spent in Downtown Disney where Christmas is in its element. The first thing we saw when we arrived in Downtown Disney was a giant Christmas tree, surrounded by iceskaters and cute wooden stands like Christmas Market. We thought about joining the ice rink, but on seeing the obligatory helmets, decided not to and explored the rest of Downtown Disney where we watched the fireworks, bought a couple of last minute presents, found a really fancy Starbucks and tried an amazing salted caramel churro. We also ate at Rainforest Cafe (Another restaurant I’d been dying to go to but thought I’d run out of time… They have thunderstorms and moving elephants… It’s magical). 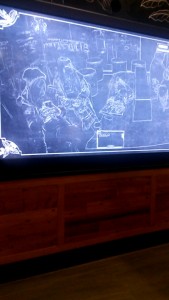