For the second year in a row, Leicester hosted Comic-Con this summer. One friend and I took full opportunity of this and made our way to Athena to spend the day celebrating comic culture whilst in costume!

Dressed as Tifa from Final Fantasy and Princess Bubblegum from Adventure Time we got a ton of attention from other fans and it felt pretty fabulous supposing this is what famous people must feel like. As Princess Bubblegum, a lot of children asked for my photo and tiny Batman even bowed to me! The sense of community was amazing, especially since the event was so big! Loads of cosplayers displayed their costumes in the cosplay competition and I’m not even ashamed to say the character references such as Deadpool’s charismatic behaviour, lightsabre fighting, and a unique scene between a couple dressed as The Doctor and Rose got my friend and I a little teary! It also got us discussing right away how we want to cosplay next year!

Along with stalls for popular culture and talks by well-known members of the various industries that compose Comic-Con, we had a great time talking to independent artists and comic book creators. Comic-Con also gave us the opportunity to get a load of things signed as well as convention-exclusive goodies! It was also super cool to see the real Ghostbusters car and I particularly enjoyed the opportunities to play old games both on a range of regular consoles as well as giant Gameboys!

There was such an insane range of things to see and do at Leicester Comic-Con to the point I completely forgot we were even in Leicester! It was immersive and felt like a completely different part of Leicester than I was used to experiencing. Since the past two events have been so successful, I’m certain Comic-Con will continue in Leicester and I cannot wait for more! 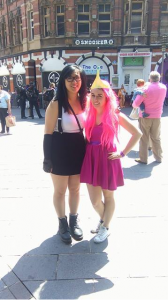 Look at the Ghostbusters behind us 🙂