The longer I’ve lived in Leicester, the more gems I’ve found whilst exploring, so I thought I’d share just a few of these adventures! I’ve found that one of my favourite things about Leicester is the endless openings of independent businesses. After returning from my semester abroad last year, this was something I had begun to notice so I wrote a blog post about some of the ones I’d found and tried so far! I’ve continued to find several more and have no doubt that this adventure will continue until I graduate.

Jones’ has become a very popular destination for students lately. They sell food for any meal of the day, but it’s their brunch food that I unfailingly see on my friends’ Snapchat stories every week. For my housemate’s 21st birthday last weekend, we decided to have brunch at Jones’ in the morning and the queuing was out the door! This probably wasn’t helped by the fact we asked for a table for 8. Their food was absolutely delicious and perhaps even more excitingly, they have introduced several vegetarian, vegan and gluten free options. It is so refreshing to see popular outlets appealing so well to their customers with dietary restrictions. It seems as though it’s starting to become normal to offer vegetarian sausages and chickpea cakes rather than the standard no-anything salad that used to be expected. Also, Jones’ do student discount!

That same day, we went to Leicester’s fairly recently opened Escape Asylum. This was so much fun (!!) and is listed as one of the best things to do in Leicester. Already feeling excited but nervous as we walked through the night to get there, the staff were more than friendly and made everything so fun! I won’t give anything away about what happens inside (!), but we made it out with 6 seconds to spare and afterwards had our photo taken with the props and got to write on the wall where the memories of countless other survivors (and otherwise) were recorded! 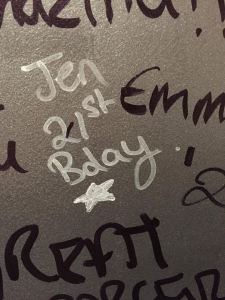 While we’ve had plenty of cocktail nights, meals and nights out for birthdays, we’ve had some other pretty unique birthday celebrations in Leicester, all of which have been experiences I’m so glad I didn’t miss! Last summer, we went for afternoon tea at Turkey Café, who also do really good cocktails I’m told! The building has a unique design and the staff were absolutely lovely and made our enjoyment their priority. We were given a cluster of sofas and comfy chairs and served with the perfect afternoon tea – it was just absolutely lovely. One of my housemate’s also had a day touring most of Leicester’s museums, which I unfortunately had to miss (but I’m told we’ll go again), followed by a meal at Las Iguanas, which I went to. This day has been recorded as one of my house’s favourites, accompanied by lots of photos of them dressed up in Victorian clothes. For another birthday my friend had a cocktail making class at Revolution! The bartender demonstrated how to make several cocktails and then of course gave them to us, and after this, we all got to make any cocktail of our choice!

I’ve had so much fun in Leicester which I feel couldn’t have been recreated anywhere else. I’ll try to keep you updated on the rest of these adventures!

UPDATE: We recently enjoyed a night of Laser Tag at Megazone for another friend’s 21st and it was my favourite of all the other Laser Tag places I’ve been to outside Leicester!