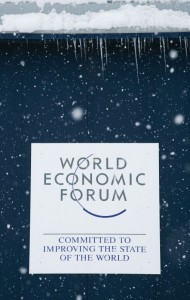 The annual meeting of the World Economic Forum started this week, in Davos high up in the Swiss Alps. The meeting is an annual gathering of the world’s richest and most powerful people, the 1%ers. Among them you find the politicians, government ministers, academics and business leaders from all over the world.

This event comes shortly after the IMF revised euro area growth rates, -0.5% is the new figure with -2.2% and -1.7% expected for Italy and Spain respectively. This is the clearest indication that we might be headed for another recession. I doubt these powerbrokers will lose much sleep over any of it though, maybe only those politicians facing re-election this year.

China was a topic of discussion and you always get the feeling that it is only a matter of time before Merkel and co crawl on all fours asking the Chinese to bail them out. Apparently it has become fashionable to occasional mourn the death of capitalism and Davos was no exception with a lively debate on the topic. There were other topics of interest but one caught my attention; ‘The Transition to Transformation of Africa’ chaired by yours truly Gordon Brown. I hope they don’t let him anywhere near any position of power.

For aspiring economists it is an interesting event that paints a picture of what issues the world is facing and how to solve them. If you visit the WEF website you can see what is going on in the world of economics and even see where a degree in economics will take you.

The founder Prof Klaus Schwab claims this forum is just to facilitate debate and a search for ideas, in my view it’s essentially just a glorified gabfest with the occasional good idea now and then. I have grown disenchanted with these global leaders, over the past year they have fiddled around and dithered, going from one summit to the next and coming up with empty sound bites.