Posted by Matthew in Engineering on March 28, 2012

I briefly mentioned in one of my earlier blogs that as part of being a 4th year I managed a team of 7 2nd years throughout their design module.  This year the task was to conceive, design, implement and operate an unmanned aerial vehicle with 4 degrees of freedom.  This means the UAV was secured to a testing arm and had the ability to translate in height, sweep, roll and pitch.  It wasn’t the easiest of tasks and it was expected that groups wouldn’t be able to solve the problems in their entirety but designing a semi-complete system proves some competency and there is a lot to be learnt from implementation.  As the task has progressed the groups have moved through conceptual and detailed design, manufacturing and prototype testing.  The end of the task is marked by a design competition in which all the designs are assessed and judged, according to a given criteria, by the visiting design professors. 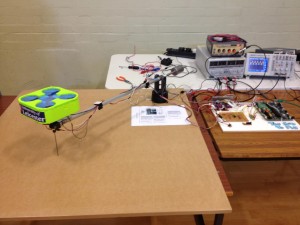 After a lot of blood, sweat and tears from my group a glorious UAV had been prepared for competition.  The UAV (pictured) houses 4 brushed DC motors on an aluminium skeleton, enclosed by a foam shell, with most circuitry mounted off board and connected via the wiring loom on the arm.  The circuit includes 2 dual motor drivers which control the speed of a DC motor with pulse width modulation.  Some counterbalance is used to ensure the craft has enough lift and the control is managed by a National Instruments sbRIO with a LabVIEW program designed by 2nd year students.  The height and sweep are measured by potentiometers on the UAV arm.  A gyroscope is mounted on the UAV to measure the roll and pitch, however, the group was not able to get this working for the competition.

When the time for demonstration came the UAV took flight and maintained a desired altitude (even after inputting some disturbance) and safely landed again.  There were smiles all round as the group was one of the few to achieve stable height control and come 3rd place in the competition.  If the competition had been towards the end of the week I dare say the gyroscope may been working too.  Aside from that I had to give a presentation for Technology and Society and rambled on rather merrily about F1 for 8 minutes so it’s been a good day all round.