I’ve now officially graduated from the University of Leicester and have an MEng General Engineering degree.  The ceremony took place on the morning of Thursday July 12th so this blog is being written a little later than expected.   The Vice chancellor took his time to address the graduands and proud families (including some Royalty from Brunei) to underline the importance of having a degree in the current economic climate and what it means in particular to have one from Leicester.  Names, degree titles and awards were read out as graduands proceeded across the stage, stopping briefly for a hand shake, and certificates were handed out at the closing of the ceremony.  Afterwards the engineering department played host by putting on a buffet lunch and distributing various academic awards from supporting engineering institutions.  The usual photos were taking throughout the day, so I don’t think I’ll forget what I looked like that day anytime soon (engineering department photos). 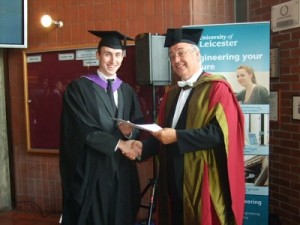 The rest of summertime will involve moving down to Bristol as I will be commencing PhD studies in October.  Between now and then I hope to enjoy more of the British weather (it is currently nice and sunny and hot).  Prior to graduation I was able to attend the British Grand Prix at Silverstone, I would recommend it to anyone who follows motorsport or F1 as it was an amazing weekend (even with all the rain).  I was lucky enough to afford a Grandstand ticket and sat at Luffield, which meant I was in the prime position to witness the Maldonado/Perez incident and the crucial Webber/Alonso overtake.  I’m definitely thinking I’ll need to go back next year, or maybe onto the continent for another GP. 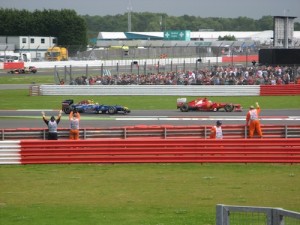 Webber winning, not bad for a No.2 driver

I’ve had a terrific time at Leicester and I’m sad to see the end of it, feels almost too soon.  I realise University is a large investment and a major decision for a lot of people, it has been an interesting 4 years in which I feel I’ve gotten to know myself better and develop as a person (even if it does sound horribly cliched).  I wish the best of luck to those currently studying towards their degrees or A-levels.  Goodbye Leicester, it’s been fun knowing you.

One response to “Graduation and Goodbye”