The Perks of Being a Female Engineer

Posted by Felicity in Engineering on February 1, 2013

A few of you may remember my post about a month ago about a Women in Engineering Event at Aston University. If you don’t, fear not, here’s a link to it: https://studentblogs.le.ac.uk/engineering/2012/12/23/engineers-assemble/

As promised, I’m back to tell you a bit more about some other Women in Engineering Events I’ve attended in the last year or so. There’s a bit of a bias towards Jaguar Land Rover events (I did my summer placement there in 2012 so I’m quite keen to see how they’re getting on) but luckily there are so few women studying Engineering that events for those of us who do make it this far are pretty plentiful!

Lots of lovely ladies and one fantastic car

First up, The Engineering Network for Women. This one is run by Jaguar Land Rover and holds a few events each year at universities around the country. The first event I attended was held at their Whitley site in the glossy, gorgeous design centre. There were some gorgeous cars, loads of lovely, normal, female engineering students and some women from JLR to talk to us about what they do at work and how they got there. We also did a mock group exercise (always useful!) and a social style exercise to learn more about how we work. You can see some of the best photos here: https://www.facebook.com/TheEngineeringNetworkForWomen/photos_stream

Afterwards I managed to find a bit of time to look around the beautiful cars on display at their Brown’s Lane Museum. The museum has now shut but you can see a virtual tour here: http://www.jaguarheritage.org/Museum.aspx

Keep an eye out for the all aluminium car and the buttercup yellow car at the back. They don’t quite have the same climb-in-me appeal as in real life but you can get that from the cars at the Heritage Motor Centre nearby (complete with student discount) and they have rocket cars too: http://www.heritage-motor-centre.co.uk/

The second event with the Engineering Network for Women was at Loughborough university. A group of us from Leicester piled in to a coach and headed over to the event, very excited to meet some of our counterparts at a local university.

We were not disappointed. There were plenty of students at the event, and a great time was had by all the Leicester Students. It was also a good opportunity to catch up on how everyone was getting on, and hear about more opportunities for female engineers such as sponsorship schemes and other events… 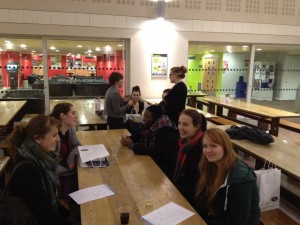 One of these other events was the Engineer Your Future Event held in the Shell Centre in London. Another one of the large, imposing towers that make up the London skyline, this building is also conveniently located right next to a train station which made travelling down from Leicester a breeze.

During the day, there was an impressive variety of topics covered. We began with a life coach telling us how to shine, and progressed to networking via talks from employers on how to be successful in the application process and a fascinating talk from the keynote speaker. I especially enjoyed finding out that Waterloo Bridge is called the Ladies Bridge because when it was rebuilt during World War Two the work force was predominantly female. That really said to me that absolute equality in the workforce is possible, even in traditionally male dominated areas like construction. Once again, there’s more information here: http://targetjobsevents.co.uk/engineer-your-future

I really love all the events where there’s a chance to meet more girls who are studying Engineering. Aside from the chance to network (what can I say, I like talking to people!) they remind me that I can do it, and that I’m not alone. I’d recommend getting Women in to STEM subjects to anyone, boys included!

Felicity graduated from the University in Summer 2013 and is no longer blogging for this site.